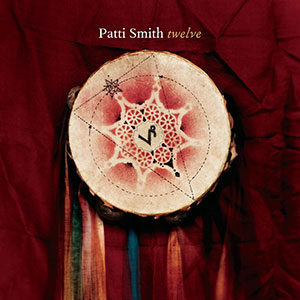 I had a lot of misgivings about this album. I didn’t buy it for almost a year after it was released. And the only reason I finally picked it up then was because Circuit City was having a storewide sale on CDs and it was one of the only things I could find that I was even remotely interested in (and I had to buy something!). My misgivings were for two reasons: on the one hand, though I consider myself a big, big Patti Smith fan (see my post about Horses), I am not been particularly fond of the four albums she’s made since 1996 (Gone Again, Peace And Noise, Gung Ho and Trampin’); and on the other hand I am always slightly suspicious of “cover” albums. It’s rare that an artist can really pull it off. Covers can be the greatest things in the world. There’s nothing like hearing a new version of a song that breathes new life into it or simply takes it to a place that the original didn’t. But they can also be the worst things in the world. There’s nothing as bad as a limp cover version that brings absolutely nothing new to the table and only makes you long to hear the original. (See my post about Shelby Lynne’s recent cover album of Dusty Springfield songs). Now, most artists can come up with a killer cover given the opportunity. A lot of it has to do with finding a song that fits them, one that they can “interpret” instead of just remake. One that suits their personality, their unique approach to music. But a whole album of covers? That’s much harder to do. There are, of course, famous examples that have succeeded mightily: Bowie’s Pin Ups, The Band’s Moondog Mantinee and Lennon’s Rock ‘n’ Roll. I found Shawn Colvin’s Cover Girl to be truly inspired, due in part to her dramatic reworkings of songs that you would think just couldn’t be done in a “folk” setting (like The Talking Heads’ “This Must Be The Place (Naive Melody)”). But those are the exceptions, rather than the rule. While Rod Stewart’s recent excursions into the “great American songbook” seems to have revitalized his sagging career and opened up a new avenue and audience for him, I find them almost unlistenable. Nanci Griffith’s admirable, but overly indulgent and way too high and mighty, self-important excursions on Other Voices, Other Rooms reveal how even the best intentions can miss the mark. My fear was that Patti Smith might be biting off more than she could chew.

Of course, let’s not forget that Patti’s magnificent, radiant, groundbreaking debut album Horses (see my post on that album) began with and was in some ways centered around a “cover,” her version (embellished as it was) of “Gloria.” And she also did a bang up, full out punk live rave of The Who’s “My Generation” as the B-Side of her first single. She included a stellar version of The Byrds’ “So You Want To Be (A Rock And Roll Star)” on her 1979 Wave album (it was even a minor hit). So, Patti is no stranger to covers and she’s usually pulled them off pretty well. Still, I was skeptical. It turns out my fears were not unfounded. Twelve is a very mixed bag. It’s mostly, as I suspected, due to the choice of material. But I think it’s more than that. Patti and the band seem to approach some of these songs with just way too much reverence and they seem to have a hard time making them their own.

The album starts out on a promising note with a slow, semi-acoustic, almost mystical version of the Jimi Hendrix song “Are You Experienced.” Patti can be heard with some trademark spoken word recitals in the background and the track features an exceptional performance on the cello by Giovanni Sollima. But the following track, Tears For Fears’ “Everybody Wants To Rule The World,” is just plain wrong. Patti and the band are unable to come up with anything that can touch the gleaming pop of the original and it just doesn’t work. That’s pretty much the case throughout the album. Some of the songs work but many of them don’t. Covering classic songs like “White Rabbit,” “Gimme Shelter,” “Midnight Rider,” “Helpless” and “The Boy In The Bubble” is a dangerous undertaking, and one, I’m sorry to say, that Smith and company just can’t pull off here. Instead of “owning” the songs, finding something new in them and giving us a version like we’ve never heard before, they end up simply mirroring the originals for the most part. When Patti tackles a song that she can inhabit it works very well. She can be one of the most passionate singers on the planet and when that fire shines through it all comes together. But too many of these songs just fall flat, they have no purpose. It’s like Patti and the band are museum curators and it’s their job to record these songs for preservation purposes. In many cases the spirit, emotion, passion and energy of the original versions seems to be completely stripped away and there’s nothing new to replace it (the Beatles’ song “Within You Without You” and Neil Young’s “Helpless” are perfect examples of this).

Probably my biggest disappointment here is Smith’s version of “Changing Of The Guards” a little known Bob Dylan song from his vastly underrated Street Legal album. I was thrilled to see this listed as one of the songs but she just can’t connect with the song. The band plods along with a noticeable lack of energy and Patti just seems bored, reading the lyrics an autopilot with a noticeable lack of passion. In Dylan’s hands this is a truly hypnotic, mystic, almost transcendent piece of music. She takes it much too seriously and everything about the song seems lackluster. If she had approached this the way she dove headfirst into “Gloria” all those years ago it might have really been something special.

Still, there are a few other songs that work, most noticeably The Doors “Soul Kitchen” and Nirvana’s “Smells Like Teen Spirit.” “Soul Kitchen” works, in part I think, because it’s the kind of song that fits Smith. If you’d never heard the Doors version you could easily mistake it for a song of her own. She manages to infuse the track with some new life and her vocals finally exhibit some fire and ardor. But the song that works the best on the entire album is “Smells Like Teen Spirit,” taken as an acoustic excursion with fiddle and banjo. Now, this is what I’m talking about! This is something new, this is original. It brings a whole new nature to the song while still retaining the essence of the original. Her rant near the end, as the band builds to an driving climax, is classic Patti Smith.

In the end Twelve is not a bad album. It’s just not necessary. It serves no purpose. There’s not much on this that can really justify its reason to simply exist. Somehow I suspect, unfairly or not, if Patti had made this covers album back in 1978, when she first considered the idea, it would have been an entirely different affair.