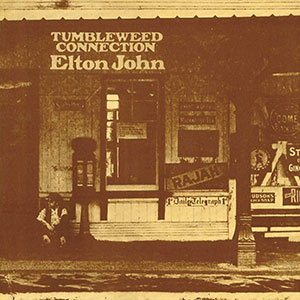 In the mid-90s Rocket/Island Records reissued the first twelve Elton John albums as “The Classic Years.” Each one was remastered, included the original album artwork, a nice essay and usually a few bonus tracks. These were perfect for me as this is my favorite Elton John period. I snapped them all up pretty quickly. Well, actually I got nine of them right away. I didn’t pick up Caribou, Captain Fantastic And The Brown Dirt Cowboy and Rock Of The Westies for several years. There’s not a single album after Hear And There that I ever listen to. I don’t think I even have any of them on CD. Oh, I did buy Songs From The West Coast when it was released in 2001, received great reviews and was hailed as his “return to form.” What a sucker I am. Like almost every other time I can think of when a similar situation has occurred with other artists I was mightily disappointed in the album. I think I listened to it a few times hoping against hope that the magic had indeed returned. Nope. I haven’t listened to it in years.

A year or two ago Universal released a Deluxe Edition of Captain Fantastic And The Brown Dirt Cowboy. It’s always been my least favorite of these first twelve “classic” albums, but I’m a sucker for these Deluxe Editions, so I waited until it was on sale at Tower Records (rip) for $19.99 and I picked it up. Still didn’t do much for me, though I gave it quite a few good listens. The live bonus disc was a nice addition though. Now along comes the Deluxe Editions of the Elton John and Tumbleweed Connection albums. Tumbleweed Connection is probably my favorite Elton John album (actually, it might be tied with Madman Across The Water), and the self-titled album is not far behind. So there was no question I’d be getting these. It was just a matter of when. I buy almost all my CDs at Amazon these days. Sooner or later they put almost all of these Deluxe Editions on sale for $19.99. I just try to stay patient, check back frequently and then scoop them up when the price is right. They reduced the price on these last week so I put in my order.

Tumbleweed Connection was the first album that I ever wrote a “review” of. A couple of friends and I started an underground newspaper at our high school in Quartz Hill, California in 1971 and I wrote a review of the album for one of the issues. I was waiting for this album. I’d really loved the self-titled album and was excited to hear more from Elton. Tumbleweed Connection did not disappoint. Lots and lots of great songs. Elton and Bernie were really close to their peak here. “Country Comfort” is probably the most well known, but “Ballad Of A Well-Known Gun,” “Come Down In Time,” “Where To Now St. Peter,” “Burn Down The Mission” and “Amoreena” are all favorites. Elton’s producer Gus Dudgeon and arranger Paul Buckmaster had a real knack for sculpting the sound to fit each of these songs perfectly. It still sounds great today.

Much has been made of the “western” theme of this album. Apparently Bernie Taupin had a fascination with the American west and it certainly shows in several of these songs. It’s not quite a concept album, though Dudgeon notes in his liner notes to the 1995 reissue that it seems the Eagles were listening (Desperado was released a year or two later). The sepia tinged old-time photographs and artwork add to the western feeling. Tumbleweed Connection didn’t have any hits. It did well on the charts at the time I think, based on the strong sales of the previous album, but it wasn’t a “single oriented” album. It also contained the only (I think) song Elton has ever recorded by another artist, Lesley Duncan’s classic “Love Song.” Duncan recorded a few albums herself in the nineties (probably as a direct result of this cover). I have a few on vinyl and one on CD and they’re actually fairly good.

The 1995 reissue of Tumbleweed Connection included two bonus tracks, the previously unreleased “Into The Old Man’s Shoes” and an early version of “Madman Across The Water.” Both are included on this new Deluxe Version, along with 11 more bonus tracks. “Into The Old Man’s Shoes” is an excellent song and would have been right at home on the album. I’m just guessing, but I wonder if it might have been left off because of the “father” reference and the fact that another song was titled “My Father’s Gun” and they both cover similar territory. The early version of “Madman Across The Water” is 9 minutes long, almost twice as long as the official version released the following year on the album of the same name. The Deluxe Version also includes 5 “piano demos,” a couple of alternate versions and 4 songs cut live for the BBC. They’re all of great interest if you’re a real fan of Elton or this album. “Sisters Of The Cross” is a song I’ve never heard before, not even on bootlegs. Great stuff. A nice essay from John Tobler, lyrics, original artwork, credits and unreleased photos round out the package, making it another very welcome addition to the continuing Deluxe Version series. I’m assuming there will be Deluxe Versions of more early Elton John albums, but I guess we’ll have to wait and see.