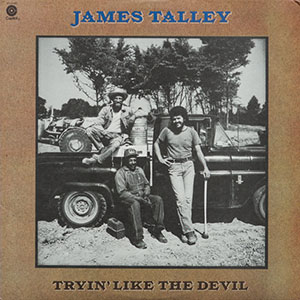 There’s a phenomenon in the music business often referred to as the “sophomore album” syndrome. It’s an attempt to illustrate why the second albums from so many artists are so disappointing when compared to their first. There are several theories that attempt to explain why this seems to happen on such a regular basis. Probably the most common is the “song” factor. Artists have years to write, rewrite and hone the songs that appear on their first album. Then suddenly they need to have a second album of tunes ready within a much shorter period of time. Back in the 70s it wasn’t unusual to put out a new album every six months to a year, especially in the country music market. Often times an artist just can’t come up with a new batch of songs so quickly. Overconfidence is another theory. Artists who experience quick success from a first album often fall victim to this fate. There’s one thing I can say for sure about  James Talley‘s second album: it most definitely did not succumb to the “sophomore album” syndrome.

Talley made four terrific albums for Capitol Records in the mid to late 70s. Straight ahead, authentic, genuine country albums. Four of the best country albums made during that (or any) decade. Got No Bread, No Milk, No Money, But We Sure Got A Lot Of Love was the first, released in 1975. I bought the album at a bookstore on the campus of SUNY Oswego in upstate New York when I had really had no money to spend on anything. I was living day to day (I didn’t even have a place to live I was just crashing with friends), but I had a few dollars that day and the record cost a few dollars, so I bought it. I must have read something about it in one of the music magazines I was constantly pouring over in those days. I don’t think the album generated much commercial success when it was released, though it did receive great reviews. It’s now considered a genuine classic. But, there were no hit singles on the album and country music in those days, even more than today, was ruled by radio. I sure spent a lot of time listening to it though. Whether the rest of the country would catch on or not to how great this guy was I just didn’t know (turns out they never really did). Many of my very favorite artists, the ones I was sure were bound to be stars, never broke through. A mix of country blues, western swing and dust bowl “okie” country it was a fine debut album from a new “Nashville” artist. But it was his follow up album, Tryin’ Like The Devil, that really turned me into a lifelong James Talley fan.

Released less than a year later, Tryin’ Like The Devil picked up where the debut album left off. Co-produced by Talley and Steve Mendell, the album featured ten strong Talley originals. Right from the beginning Talley is clearly more confident, more self-assured, both in his songwriting and his singing. Whereas he sometimes seemed a little tentative on the first album, like he was still finding his footing, Tryin’ Like The Devil was a major step forward. The album announces itself with the rollicking country blues of “Forty Hours.” Throughout the album themes of loss, sorrow, difficult times and, most importantly, everyday people persevering in the face of hardship, wind their way through Talley’s lyrics. Sometimes the song reflects that sadness in a defiant uptempo manner as with “Forty Hours,” the title track, “Tryin’ Like The Devil,” “You Can’t Ever Tell” and the minor hit “Are They Gonna Make Us Outlaws Again?” which pays tribute to his Oklahoma roots evoking both Woody Guthrie and Pretty Boy Floyd. But the real heart and soul of this album is in the magnificent clutch of stunningly beautiful, achingly sad ballads. “Sometimes I Think About Suzanne” might be the best song Talley has ever written. “She Tries Not To Cry,” “Deep Country Blues” and “She’s The One” are masterful examples of Talley’s ability to tell a story of heartache without ever resorting to traditional cliches and methods. Another real standout is “Give My Love To Marie” written from the perspective of a black lung miner from East Tennessee.

Capitol released Blackjack Choir in 1977 and Ain’t It Something in 1978. Both are excellent albums, but Tryin’ Like The Devil is by far my favorite. All four albums were released on CD by the German label Bear Family Records in the late 80’s. Talley tried for years to get Capitol to release the albums on CD in the US, but to no avail. He was finally able to license the albums from Capitol and re-released Got No Bread, No Milk, No Money, But We Sure Got A Lot Of Love on his own label in 2006. I was told he had plans to re-release the others but so far I haven’t seen any sign of them. He’s made eight or nine new albums in the thirty years since the Capitol deal ended, some of which are easy to find and some of which are not. The 2000 release Nashville City Blues is especially worth seeking out.

These days Talley sells real estate in Nashville. He appears to still be writing songs, making music and recording albums. The country music industry could use a lot more artists like James Talley these days. Original, unique, honest, straightforward. Over the years it seems that country music has always gone through cycles where it’s careened dangerously close to “pop.” But sooner or later it always gets pulled back to it’s roots. Be it Buck Owens, Merle Haggard and Johnny Cash in the 60s, Waylon, Willie and the other “outlaws” in the 70s or Dwight, Randy Travis, John Anderson and the other “new traditionalists” in the 80s, just when it seems the car is about to plunge hopelessly over the edge it rights itself, straightens out and gets back on track. Sadly, I’m afraid those days may be gone for good. It could be that this time there is no going back. I blame Garth Brooks for that, but that’s another story altogether.