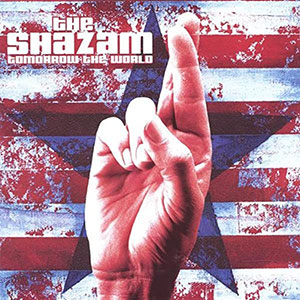 We installed hard wood flooring in my home office recently and that meant moving all my CDs and vinyl out into a storage shed for a couple of months. No small task. Moving it all back in required me to once again alphabetize the CDs as I put them onto the shelves because no matter how careful you are packing they are going to get a little out of order when transfer them from shelves to boxes and back to shelves again. As I was unpacking a box one day recently something about this CD caught my attention when I came across it and I pulled it out and stuck it on my “listen to next” shelf. Now that in and of itself is no guarantee I’ll get to something any faster really. There are a couple of CDs that have been on my “listen to next” shelf for years. Something else always manages to get in the player before they do. It seems I still buy CDs faster than I can listen to them. So some things end up sitting on the shelf for awhile before I get around to listening them. Some things sit there for a very long time indeed.

I know next to nothing about The Shazam. I wonder, is the name a small tribute to the sixties British group The Move? I’m not real sure where this CD even came from. It was released in 2003 on the Not Lame label out of Colorado, the foremost powerpop label in the world. Maybe that’s why I have it. I have a lot of respect for Not Lame and will give most anything they put out a listen. But I don’t have any memory of buying this particular CD. Maybe someone sent it to me. Maybe it was in a goody bag at a SXSW convention. I just don’t know. The band, it turns out, is from Nashville, so there may be some connection there. Anyway, against all odds, I threw this CD into the player one day and sat back in amazement. This has got to be the best powerpop album I’ve heard in a long, long time. I’ve always been a follower of the genre, from The Who to Badfinger to The Dwight Twilley Band to The Cars to The Cretones and on and on and on. The sound (and the feel and spirit) on this album is “big.” It’s not Phil Spector “wall of sound” big, more like a loud, raucous, delicious, gorgeous powerpop big, due in no small part, I’m sure, to the brilliant production by Brad Jones, a well known Nashville rock producer. We’re talking loud crunchy guitars throwing off powerchords left and right, snappy drums keeping everything moving at a non-stop, no frills pace, great melodic hooks everywhere you look and crisp vocals and harmonies holding everything together.

Many of the songs have that “classic” feel, like you’re heard them before, even though you know you haven’t. That’s due in small part to some ingenious “steals” peppered throughout the songs (the “London Calling” riff hidden away in “You Know Who” or the “Brown Sugar” riff that kicks off “Rockin’ And Rollin’ (With My) Rock ‘N’ Roll Rock ‘N’ Roller” the first song on the album). But it really has a lot more to do with the terrific songwriting skills of Hans Rotenberry (who also handles guitar). This is one guy who knows his way around a punchy melody and a memorable hook. There’s enough “ear candy” here to keep even the most rabid powerpop fan happy. At this point it’s hard for me to pick out many real favorites because all of the songs just knock me out and I haven’t lived with the album enough to see what stands up best over time. But I will say that “Squeeze The Day,” “The Not Quite Right Kid,” “Goodbye American Man” and the sole ballad “I’m Not Lost Anymore” are real standouts. And then there’s “Rockin’ And Rollin’ (With My) Rock ‘N’ Roll Rock ‘N’ Roller” which is probably my favorite right now. The song itself is all fluff, but man, what fluff. It’s the kind of song that sounds like it was thrown together in ten minutes (and maybe it was) but it’s also the kind of timeless classic that turns out to be exactly what it sounds like on the first listen, pure pop magic.

A little research on allmusic.com shows this is the fourth release from The Shazam. There’s not a lot of info about the band there so I checked out their myspace page. Not a lot of information there as well, but I did find something about a possible new album titled Meteor they are said to be working on. I’ll probably end up buying their other three albums on Amazon.com sometime soon, because if they’re anywhere near as good as this I want to hear them. It’s so great to come across an album like this in my collection every now and then: a real gem I didn’t even know I had. Makes me wonder what else is hidden away in those shelves I just haven’t had time to get to yet. If only there was more time in the day maybe I could get caught up. Nah, probably not.