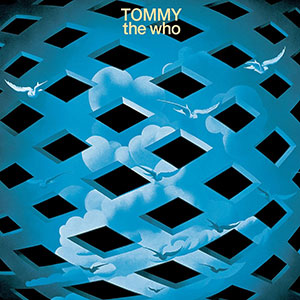 I came to Tommy rather late in the game. I don’t know why. Just too many other things got in the way. Who’s Next was always my favorite Who album. I remember listening to it’s debut on FM radio when I was in High School. I was at my girlfriend’s house in Palmdale, California late one night and they played the entire album from start to finish. I connected with it immediately. I’d heard other Who songs and albums, but Who’s Next was the first one I actually bought and listened to over and over. I bought other Who albums over the years, but none of them really stuck with me like Who’s Next.

Of course, I’ve always been familiar with the “hits” from Tommy: “Pinball Wizard, “We’re Not Gonna Take It,” “See Me Feel Me/Listening To You” and the other classic staples of FM radio. But I’d never purchased the LP or CD. I have over 5,000 LPs and even more CDs. It just slipped through the cracks. But I’m a huge fan of the “Deluxe Edition” double CDs that Universal Chronicles puts out. I think I saw this on sale at Amazon awhile back and decided to get it. I’ve been listening to it quite a bit in the last few weeks and it’s really opening up to me. I think I’d always been slightly “put off” by the “concept” aspect of it. Somewhere inside of me, fairly or not, it just seemed if you wrote songs specifically to tell one long story, some of them just weren’t going to be that great, because to a certain extent they were being forced. I love the feel of this music. The texture, the soundscape. Not all of the songs work for me as individual songs, but when I take the whole thing in as one big piece it’s quite amazing. The Who began work on it 40 years ago this fall, but it feels very fresh and alive to me, not dated in the least. I’m enjoying getting to know this album finally.

I must say Disc Two is somewhat of a let down to me and not quite up to what I’ve come to expect from the Deluxe Edition series. The Out-Takes and Demos are not particularly illuminating and don’t really add much to the experience. The Stereo Only Demos are nice, but again, they don’t really add much to the experience. I’d have much rather had a full, unreleased complete live version for the album from that time period.

Tags: The Who, Tommy