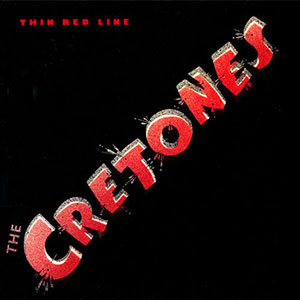 Linda Ronstadt took a lot of flak in 1980 upon the release of her new wave influenced album Mad Love. She was accused of jumping on and trying to ride the punk/new wave bandwagon, a place where many believed she had no business. She was, after all, known primarily as a “folk,” “country-rock” “70s pop” artist. She didn’t write her own songs. To many she was nothing more than a fluffy Top 40 songstress. But, Ronstadt was always so much more than that and throughout her career she had a great talent for discovering songwriters before anyone else. Warren Zevon, Karla Bonoff, J.D. Souther, to name just a few. One of her main influences for the Mad Love album was Mark Goldenberg and his band The Cretones. Goldenberg played guitar on most of the album and contributed three tracks (“Mad Love,” “Cost Of Love” and “Justine”). Along with three Elvis Costello songs and more typical Ronstadt fare (Neil Young, 60s pop) Ronstadt created a unique slice of something I can only describe as Southern California Female Power Pop. It’s a singular album in her catalog, none of her records before or after it bore much resemblance to this outing.

The Cretone’s first album, Real Love, was released on Planet Records around the same time in 1980 (Planet was distributed by Elektra/Asylum, Ronstadt’s label).  From the opening blast of “Real Love” it’s clear that this music has bite. The guitars are loud, bracing and ringing, the backbeat solid and muscular. Power pop never sounded so good, at least to me. Perfectly produced by the band’s drummer, Peter Bernstein, it’s a non-stop barrage of catchy pop songs with a hard edge and plenty of drive. This is not punk rock. This is not new wave (although the band is often labeled as such). This is straight ahead power pop and Goldenberg is one hell of a songwriter. It’s a relatively short album, clocking in at 34 minutes, but there’s not a throwaway tune anywhere to be seen or heard on the disc.

The Cretones released a follow up album, Snap! Snap! in 1981 and then they disappeared. Goldenberg later worked as lead guitarist for Jackson Browne (as well as working with Peter Frampton, Bonnie Raitt and Chris Isaak). The wrote a couple of hits for The Pointer Sisters and The Eels.

You won’t find any Cretones music on CD. None. It was a shame they were left off of the otherwise wonderful Rhino No Thanks! The ’70s Punk Rebellion box set, where they would have sounded perfect next to Elvis Costello, Eddie And The Hot Rods, Blondie, Joe Jackson and others.