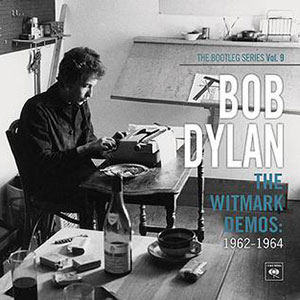 The subject of bootlegs is always a touchy one. Some people have a strong opinion one way or another. Many average music listeners don’t really have much of an idea of what they are all about. Those that search out and collect bootlegs have their own feelings about the “morality” of the practice. Bootlegs can generally be broken down into two categories: live and studio. Live bootlegs can be broken down into a few more categories: audience recordings, soundboard recordings and radio or TV broadcasts. Audience recordings are made when someone sneaks a tape recorder (or digital recorder) into a concert and records the show from the audience. Quality on these can vary widely from truly outstanding to unlistenable. Soundboard recordings are made on the soundboard at the concert by the performer’s crew and are usually very, very good quality. Generally someone “leaks” these types of recordings to the fan base (or in some cases it’s possible they have been stolen). Radio or TV broadcasts are taped via the radio or TV when a show is broadcast live (or at a later date) and are usually excellent quality. Studio recordings generally consist of alternate versions or outtakes that someone has, once again, leaked to the fan base (or, again, they may have been stolen). Many artists these days are quite willing to allow fans to exchange live recordings as long as money is not involved. Some even encourage the practice. The Grateful Dead are probably the most well known band to do so, usually setting up a special place in front of the stage where tapers could record the show from. Studio recordings are a completely different matter. It’s harder to justify the trading and exchange of studio recordings since the artist has not usually given any permission to do so. I collect them all. I don’t try to make any “justification” for my “habit.” I’m a junkie, pure and simple. The one great thing that has happened with the advent of the internet, bit-torrent and digital trading is that most of the profit has gone out of the bootleg industry. True fans will never sell bootleg material. It is traded openly and freely. There is also a case to be made for “historical” purposes, though that’s a pretty lengthy discussion which I think I’ll save for later. But, in short, it’s the fans who have often recorded and archived a lot of this material that may well be considered priceless hundreds of years from now and looked on in a much different light.

In the early 60s, long before he was well known, around the time he recorded his first album, Bob Dylan obtained a publishing contract with M. Witmark & Sons. Between 1962 and 1964 he recorded at least 40 (that we know of) “publishing demos” for the company. Dylan would come into the offices and sit before a tape recorder, just himself, his guitar (sometimes a piano) and occasionally a harmonica. These performances were simply meant to serve as an audible source which the publisher could use to transcribe the songs’ music and lyrics for legal purposes. Sometime in the 60s a very rare, one-sided 9 track LP was also pressed up to distribute to other artists who might have been interested in recording some of the songs. 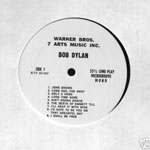 A copy of this album sold on eBay a few years ago for $737 (see image on the left). Many of these songs were never officially recorded by Dylan. Some were indeed recorded by other artists. There are however, demos of some of his best known early songs, including “Blowin’ In The Wind,” “The Times They Are A-Changin’,” “A Hard Rain’s A-Gonna Fall,” “Don’t Think Twice, It’s Alright” and “Girl From The North Country.” Some of the unrecorded songs are excellent and some are merely just good. It’s easy to see why some of them were never recorded by Dylan or anyone else. The fact that Dylan was not “performing” these songs for an audience, or recording them for an album, makes them very unique. Dylan, for the most part, is very relaxed, just running through the songs. This has both good and bad consequences. On the one hand we get very off the cuff, spontaneous performances. There are also a few instances of Dylan playing songs on piano that he usually performed on guitar: a great version of “Mr. Tambourine Man” for instance. On the other hand Dylan’s not really trying very hard all the time and a few of the versions are fairly uninspired. In fact, at one point, while singing “Let Me Die In My Footsteps” he stops and says, “It’s a drag, I sang it so many times.” Other times he sings a portion of the song so the company can get the basis of the verse and chorus and then says, “I’ll write down the other verses for you later.” Still, for any Dylan fan these tracks are priceless. Lots of songs you will never hear anywhere else. Historically they are quite significant and very important.

These demos have been collected in at least three well known bootlegs: The Witmark Years, Through A Bullet Of Light and The Witmark Demos. All three contain basically the same material. This version, The Witmark Years, is generally considered to be the best quality and it also arranges the recordings in chronological order.

Quality is very good to excellent throughout this collection, though it does vary a bit from session to session and of course, it is not as good as officially released material. Three of the songs on this double CD have been released officially on Dylan’s The Bootleg Series: Volumes 1-3: “Walkin’ Down The Line,” “When The Ship Comes In” and “The Times They Are A-Changin’.” Here’s hoping Dylan and Sony see fit to release more of them, perhaps an entire double CD of all the tracks. That’s the best way to combat bootlegging: release the material officially.