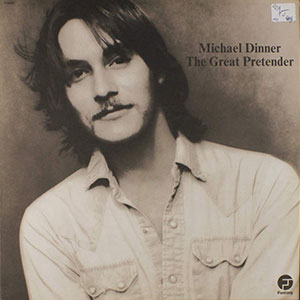 I spent my teenage years in Lancaster, California, a small town in the desert about an hour north of Los Angeles. I had lived there for many years when I was younger, before we moved to Ohio for about four or five years and then back to Lancaster when I was thirteen. We could get the Los Angeles FM radio stations, so this is where I was usually exposed to new music. And we got the Los Angeles Times newspaper. The music critic was a guy named Robert Hilburn. I think he stayed in that post until 2005, writing for the paper for almost 40 years. I would read his columns and reviews in the 70s almost religiously. He seemed to have very similar tastes to me so I was often encouraged to seek out and buy albums that he recommended. In 1974 that included three artists new to me: Waylon Jennings, Billy Joe Shaver and Michael Dinner. Waylon had recently released his breakthrough album Honky Tonk Heroes. Billy Joe Shaver, who wrote all but one of the songs on Honky Tonk Heroes had just released his first solo album, Old Five And Dimers Like Me. Shortly after that Michael Dinner released his first album, The Great Pretender. It was a long time ago so I am a little fuzzy on the details but I think I remember Hilburn had suggested that Jennings should record some of Dinner’s songs. (That never happened.) Regardless, Hilburn had great things to say about all three albums so it wasn’t long before I picked them all up. All three are still big time favorites.

I don’t know a lot about Michael Dinner. The Great Pretender is fabulous album, along the lines of Jackson Browne and some of the other LA singer-songwriters, but a little more country. The songs are first rate. The album is full of the LA players of the day: John Boylan, Michael Bowden, Ed Black, Don Felder, Sneaky Pete, Andrew Gold, Al Perkins, David Lindley, Larry Knechtel, Mike Utley and more. Linda Rondstadt, Herb Pedersen, Gail Davies and Ronee Blakely all sing hamony. John Boylan produced the album and his production is picture perfect for Dinner and his songs. Interestingly, the album was released on Fantasy Records which was not known for singer-songwriters, country or anything along those lines. Which is maybe why the album never went anywhere and why I never learned much about Dinner. I don’t know if he ever toured around this album, I never saw anything about him playing live and I tended to keep a pretty close eye out for those kinds of things.

The album kicks off with the title track: “All the boys in Mobile call you Jenny, all the boys in Memphis call you Jane, all the boys in this bar call you easy, but I’m the only one that knows your name.” It’s a great opening song. There are several fine ballads (“Jamaica,” “Sunday Morning Fool” and “Pentacott Lane”), a truck driving song (“Yellow Rose Express”), a straight ahead country barroom song (“So if you say your name’s Betty Grable, I’ll say I’m really John Wayne, When you’re five miles from nowhere with nothing, who gives a damn ’bout a name”) and a rocking tune about the “Tattooed Man From Chelsea” with Don Felder from the Eagles on great slide guitar. It’s a well-rounded disc with lots to offer. I listen to this album on a very regular basis. I never get tired of it.

Dinner made another album for Fantasy, Tom Thumb The Dreamer. It’s very good, but I like the first album better. Then he was never heard from again. At least in the music world. He’s one of the those “great lost” artists that made a couple of wonderful albums and then just disappeared. Many years later I was watching an episode of the TV show The Wonder Years and noticed that it was directed by Michael Dinner. Well, there’s probably lots of Michael Dinner’s out there I figured. Still, it stuck in my mind. Not too long ago I got curious and I did some searching on the internet and sure enough, it’s the same Michael Dinner.

Neither of Dinner’s albums have ever been released on CD anywhere in the world as near as I can tell. I’ve ripped both of them to CD, along with a 45 released prior to the second album with a different version of one of the songs on that album. I think he’s done a lot of TV directing including Karen Sisco, Chicago Hope, Kidnapped, Law & Order and many more. Too bad he never made any more music. Or maybe he did and it was just never released to the public. Hey, Michael, if you’re out there, maybe it’s time for another album. What do you say?