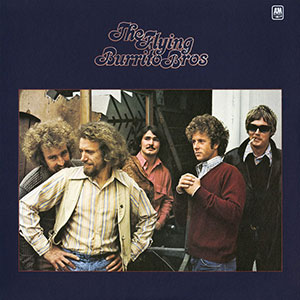 You won’t find many bigger Gram Parsons’ fans than me. Well, I’m sure there are some true “fanatics” out there who are even more pathologically obsessive (and excessive) than I am. But, I’m up there pretty close to the top myself. Both his solo albums are in my Top 10 All-Time Albums. I have a cherished, framed, original poster from his run of shows at Liberty Hall in Houston with Emmylou and the Fallen Angel band in 1973. I’ve got a fair amount of bootlegs, vinyl, CD and CDR. I even compiled my own bootleg, The Genuine Early Years, with some material that I’ve never seen anywhere else. The first Flying Burrito Bros album, 1969’s The Gilded Palace Of Sin, is also in my Top 10. Gram only made two albums with The Flying Burrito Bros, The Gilded Palace Of Sin and Burrito Deluxe. Burrito Deluxe was a disappointment to everyone, partly because Gram had apparently lost interest in the band (and maybe music in general). He was fired from the band shortly after that release. And therein lies the first problem with the legacy of the Burritos. Many people tend to (unjustifiably) write off anything the Burrito’s did after Gram left. The two albums he made with them, along with a handful of outtakes, have been repackaged over and over and over. I mean we’re only talking about two albums here folks. The trend began with the vinyl issue of Close Up The Honky Tonks in 1974. At the time this was an excellent idea, collecting some of the best tracks from the original two albums, a couple of stray 45s and a bunch of unreleased outtakes. But the labels have continued to repackage and rerelease this same material ad naseum since them. The very first CD I ever bought was the 1988 compilation called Farther Along: The Best Of The Flying Burrito Brothers. There’s a 1997 single disc that combines the entire two albums. There’s a 2000 release on A&M called Hot Burritos! Anthology 1969-1972. I have a 2002 release on A&M Chronicles titled Sin City: The Very Best Of The Flying Burrito Bros. The exact same CD was released a few years later with the same cover, same songs, same booklet, same everything, just renamed The Definitive Collection. And don’t even get me started on the European anthologies and compilations. There’s another good half a dozen, all with the exact same material. As you may have guessed by now the labels keep putting these out because idiots like me keep buying them even though there’s absolutely nothing new. Enough already.

In addition to being a huge Gram Parsons fan and admirer I’m also very, very fond of Chris Hillman. In many ways, Hillman’s influences on the “country rock” scene of the sixties even outweigh Gram’s. Gram gets all the credit (and I do mean all the credit), but you could make a strong case that without Hillman a lot of the music that is credited to Gram might never have happened. Additionally, Hillman was a founding member of the Byrds, one of the most influential bands in American pop/rock history. And, he’s gone on another 30+ years after Gram died to continue to make outstanding music. The Chris Hillman catalog is far, far  wider, deeper and more impressive than what Gram left behind. It really pissed me off to see the new reissue of the Flying Burrito Bros live in San Francisco in 1969 issued as “Gram Parsons with The Flying Burrito Bros.” Completely disrespectful to the rest of the band and especially Hillman. Hillman was as much responsible for The Burrito Bros as Gram.

After Gram was fired Hillman decided to keep the band alive. The third Burrito’s album was released in June 1971, simply titled The Flying Burrito Bros. It’s an album that, even though it sold better than Burrito Deluxe, has never gotten the credit and respect it deserves. A new, young upstart by the name of Rick Roberts was brought on board. I’d hate to say he was brought on to “replace” Gram Parsons, because that really wasn’t possible. But Hillman needed another voice in the group and Roberts fit the bill. He ended up being quite an integral part of the album, writing three of the ten songs and co-writing four more (with Hillman). In fact, Bernie Leadon left the band after this album, supposedly because he felt his songs and vocal contributions were being pushed aside in favor of Roberts. Still, you can’t feel to bad for Leadon. He did, of course, go on to be one of the co-founders of The Eagles.

The album kicks off with a very soulful, very country version of Merle Haggard’s “White Line Fever.” It’s clear from the get go that things have taken a bit of a turn here. Roberts’ songs “Colorado” (later covered by Linda Ronstadt), “Four Days Of Rain” and “Why Are You Crying” are highlights. The four Hillman/Roberts songs are all very good. Also along for the ride is a nice cover of Dylan’s “To Ramona” and Gene Clark’s “Tried So Hard.” This is more “folk/singer-songwriter/country” than the “cosmic/country” of The Gilded Palace Of Sin. The album is nicely produced by Jim Dickson (who helped launch the Byrds and worked with numerous other LA sixties groups). It certainly isn’t the groundbreaking album that The Gilded Palace Of Sin was, but in it’s own way it more than holds its own against Burrito Deluxe.

The Flying Burrito Bros didn’t help the band reach any bigger audience than the two previous albums had. It managed to chart on the Billboard Top 200, which was something the second album had not done. Hillman soldiered on for another album, 1972’s Last Of The Red Hot Burritos, a bluegrass leaning live album with yet another lineup, before deciding to throw in the towel and join up with Stephen Stills in Manassas. Roberts made two fine albums for A&M (one of which Hillman produced) before striking it rich with Firefall. Raven Records, the superb reissue label out of Australia, has done us all a huge favor and packaged these two albums together on one disc. They’ve added a couple of bonus tracks (nothing new, but still nice to have here) and included some very nice liner notes. It’s nice to have both of these albums on one CD. It’s not the first time The Flying Burrito Bros has been available on CD: it was included in its entirety in the above mentioned two disc Hot Burritos! anthology (which is still available) and also released by Mobile Fidelity in 1991 (now out of print). Still, for us collectors, it’s nice to see these albums getting some attention rather than another repackaging of the first two.

Oh, the second problem with legacy of the Burritos is that an never ending parade of impostors has carried on the name, off and on, for almost forty years now! It’s a shame and an embarrassment. The name should have been retired with respect after Hillman closed things down in 1972.