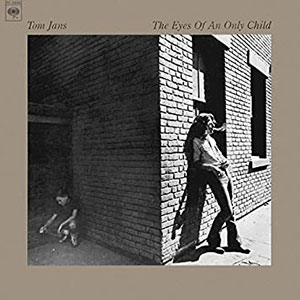 The Eyes Of An Only Child

When I was younger I used to move around quite a bit. I left home for college when I was 16. Just before my 18th birthday I dropped out and took off for Europe. Between the time I left home and when I bought my first house in San Marcos, Texas about fifteen years later I lived in places like Los Angeles, CA, Key West, FL, Syracuse, NY, Austin, TX, Houston, TX, Lancaster, CA, Cupertino, CA, Eugene, OR and lots of places inbetween. Some for only a few weeks or months at a time. I hitchiked back and forth across the US at least five or six times during those years, usually from coast to coast. I once hitchhiked non-stop from New Haven, CT to Los Angeles in four and a half days with only $2.00 in my pocket (I still had 20¢ left when I got back home). I once figured out I had lived in over sixty different houses and/or apartments over a ten year period.

When I heard those opening lines from “Gotta Move” on Tom Jans‘ The Eyes Of An Only Child album I was completely hooked. It’s still one of the saddest, sweetest songs I’ve ever heard. I’ve never come across a song that so eloquently captures the “sweet sorrow” contradiction of moving and traveling. I had heard Tom Jans before. I first became aware of him when I saw him open for Cat Stevens at the Greek Theatre (Los Angeles, CA) in November 1971 with his singing partner Mimi Farina (Joan Baez’s younger sister). Jans and Farina put out a wonderful album in 1971 titled Take Heart. Tom wrote the classic song “Loving Arms” that’s been covered by everyone from Elvis Presley to Kris Kristofferson and Rita Coolidge to Petula Clark to Dobie Gray to Olivia Newton-John to the Dixie Chicks. He released a stellar self-titled solo album on A&M in 1974. The Eyes Of An Only Child appeared a year later. This collection of ten songs was the high point of his career and it remains a real treasure in my LP collection. Every song is a gem, but the real standouts are “Gotta Move” (co-written with Lowell George), “Once Before I Die,” “The Lonesome Way Back When” and the title track. “Out Of Hand” was a smash country hit for Gary Stewart in 1975. Lowell George is listed as the “Executive Producer” and musicians include Bill Payne and Sam Clayton (also from Little Feat), Jesse Ed Davis, Fred Tackett, David Lindley, Jeff Porcaro, Jim Keltner and Mike Utley. They just don’t get any better than that and the playing throughout this album is just faultless. Valerie Carter and Herb Pedersen are along for background vocals.

Jans made one more album for Columbia, Dark Blonde (released in 1976). While it contained some terrific songs, it didn’t quite measure up to its predecessor, though it was certainly close. After that he dropped out of site. A new album, Champion, was released in a very limited edition on a Japanese label in 1982. I’ve never been able to find a copy (and believe me I’ve tried). He was in a very serious motorcycle accident in 1983 and then died in 1984, it’s said from a drug overdose (but don’t they always say that when they don’t know how a musician dies?). I was really saddened when I heard of his death. He was such a great, unique songwriter. He had the ability to write such personal, emotional, passionate songs without ever being sentimental or sappy. Not too many songwriters can do that. Joni Mitchell is another that comes to mind.

Tom Waits wrote a song, “Whistle Down The Wind,” for Tom Jans and it’s included on his 1992 album Bone Machine. Unfortunately, none of Tom’s albums have ever been released on CD in the US. I, of course, have ripped all four of them from vinyl to CDR, but it sure would be nice to get these on real CDs. The Eyes Of An Only Child and Dark Blonde were released in Japan in 2007, but I haven’t been able to bring myself to shell out the $35+ for each one. Take Heart and Tom Jans have never been released on CD anywhere in the world that I know of. It’s a crying shame. All of these albums are well worth searching out on vinyl if you can find them. Tom Jans remains one of the great “lost” songwriters of a generation. Today very few seem to know of him, but those that are familiar with his work hold his songs and music very dear.

Tags: The Eyes Of An Only Child, Tom Jans, Tom Waits