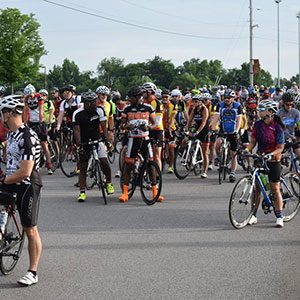 Last Saturday (May 23rd) I rode the Clarksville Rotary Annual Metric (known as the CRAM) in Clarksville, TN. Clarksville is about 45 miles north of Nashville, very close to the Kentucky border. I finished the 100 mile route with a ride time of 4:31 minutes. That’s a pace of 22.2 miles an hour, a record for me on a century. I rode mostly with a group that Les Wooldridge had organized of about 10 core riders, though that group went up and down in size as the day progressed. The Clarksville ride is very popular with people looking to complete a fast “century.” It’s almost completely flat and allows for some really good finish times. I’ve been doing a lot of riding this season and the CRAM makes my 5th century this month, another record for me.

The ride began at 7:30AM and we made sure to start out at the very head of the pack. Our goal was to complete the ride in under 5 hours “real” time. We figured that would mean about a 22 mile an hour average with 3 stops of about 7 or 8 minutes each. We wanted to hang with the lead pack for at least the first 20 miles or so and then back off and keep our 22 mph pace. Things progressed very nicely and I found I was hardly having to work much at all. Because of the flat terrain, the large group, and the amount of training I’ve been doing this year (I’m stronger than I’ve ever been) my heart rate stayed mostly in the 60% to 70% range (116 to 135), which is very easy to maintain. Les and a few others tried  to organize a double paceline, but the large group could never really get it together.

We stopped at the 40 mile rest stop for food, drink and bathroom breaks and then headed back out. Unfortunately, a crash occurred at about the 50 mile mark. One of the turns was not marked very well. I was actually leading the group at this point and I completely missed the turn. As others noticed it some of them slowed down and attempted to make it and the crash occurred. No one was seriously injured, but several folks were scraped up pretty good and Jay’s back wheel was bent. Les was able to get it back into shape enough for Jay to ride and we continued on. Somewhere around this point we were finally able to get a good double paceline going and that really helped with speed and effort. Another stop around the 70 mile point and then we were off to the finish. At about 85 miles a small group of 5 of us took off from the front and we never looked back. I rode harder the last 15 miles than I had the entire ride up until that point. We dropped one more rider somewhere around the 95 mile point and so there were four of us who finished together. It was a good ride, the fastest century I’ve done. We didn’t quite make the under 5 hour real time goal due to the crash and a flat tire a little later on. But, even with those problems we came pretty close, I think it was 5 hours and 5 minutes real time.

There was a strong possibility of rain forecast for the day but thankfully it held off and we had great weather. Mostly cloudy and not too hot which was just perfect.

I’ve ridden the CRAM at least 3 or 4 times before. It’s a great ride and always a lot of fun. It’s well organized and there never seem to be any problems. The only complaint I have is that the rest stops are not noted on the cue sheet, which is really, really strange. None of us understand why this is and they can’t seem to explain it. For what it’s worth, rest stops should always be noted on cue sheets so the riders can easily plan their stops and strategy. Maybe they’ll wise up and get them on the cue sheets next year.