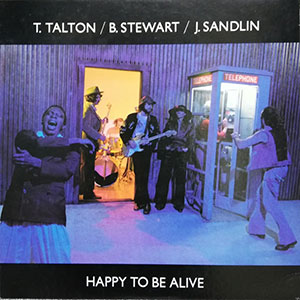 The late sixties and early seventies were the golden years for the independent record labels. This was long, long before the entire music industry was swallowed up and controlled by three or four giant conglomerates. Like many record aficionados I had my favorite indie record labels. Asylum was my very favorite. In the mid-seventies they seemed like the label that was releasing everything I loved: Jackson Browne, Warren Zevon, The Eagles, Joni Mitchell, John David Souther, Linda Ronstadt, Souther-Hilllman-Furay Band, Tom Waits, etc. There were also some lesser known, but still very good artists I liked such as Dick Feller, Andrew Gold, David Blue and Dennis Linde. And, of course, they had two Bob Dylan albums (Planet Waves and Before The Flood) and the Byrds reunion album. It got to the point where I knew every album on the Asylum label by the catalog number (For Everyman was 5067, Desperado was 5068, etc.). Other favorite labels included Elektra (which later merged with Asylum), Island, Capricorn and Arista. I wouldn’t go as far to say that I would buy anything on one of these labels, but I would certainly consider it. If there was a band or an artist I’d never heard of before I’d pay more attention simply because they were on one of these labels. Due to their excellent track record, labels like these had credibility with me (and lots of others). Sure there were some misfires now and then, but that’s to be expected. But these were the days when indie labels like this were really run by music lovers, music fans. Sadly, they would all be swallowed up at some point by major label greed and all that credibility would slowly run down the drain. There are still excellent indie labels around (there will always be) but they don’t have the standing, power and marketshare that these labels had back in the day.

Capricorn was the home to “southern-rock,” mainly The Allman Brothers, The Marshall Tucker Band, Wet Willie, Elvin Bishop and more. They also released a couple of fantastic albums by Livingston Taylor (brother of James). One of my favorite releases on Capricorn is a very hard to find album by Tommy Talton, Bill Stewart and Johnny Sandlin (listed on the album as T. Talton / B. Stewart / J. Sandlin) called Happy To Be Alive released in 1976. It’s never been released on CD (of course) and to be truthful I’ve never even found anyone else who’s heard it. It’s a real shame, because this is a great album. It’s very unique album, quite unlike anything else ever released on Capricorn.

Tommy Talton was a member of Cowboy, another Capricorn band who released four albums in the seventies (Reach For The Sky, 5’ll Get You Ten, Boyer & Talton and Cowboy). The band made some fine albums (none of which are available on CD), but never really garnered much of a following outside of their home base in Macon, GA, though they did tour with Gregg Allman and had two songs featured on his 1974 live album The Gregg Allman Tour (which is also, unfortunately, no longer available on CD, though it is available as an MP3 download at Amazon and iTunes). Talton plays all the guitars and handles all the vocals. Bill Stewart, a well known rock drummer, plays drums on the album. Stewart worked with folks like Roy Buchanan, Cowboy, Bonnie Bramlett, Greg Allman, The Allman Brothers, Tim Hardin, The New Riders Of The Purple Sage and lots of others. Johnny Sandlin was a very in-demand producer and engineer for the Capricorn stable of artists as well as the head of A&R for the label. He produced records by Cowboy, Alex Taylor (another James Taylor brother), Duane Allman, Wet Willie, White Witch, The Allman Brothers Band, Dickey Betts, Elvin Bishop and a whole lot more. He was the drummer for Hourglass, the band led by Duane and Gregg Allman before the Allman Brothers. He also plays drums, guitar, bass and probably a few other instruments. Sandlin produced this album and plays bass (and guitar on two songs).

I have no idea how this album came about. It looks, sounds and feels like a one-off project, though I’m sure if it had seen some success those involved would have been happy to continue on. This is not a “big” album. It’s not a grand statement. It’s really just three friends (with a little help from a few guest musicians) hanging out, recording some songs and basically just doing what they do best, making music. But don’t let that fool you. It’s honest, heartfelt music that really stands up remarkably well over thirty years later.

Tommy Talton wrote nine of the ten songs on the album (one is a co-write with Art Schilling and one is an Allen Toussaint cover).  “Don’t Ride Away” opens the album and sets the mood. It’s an distinctive mix of southern-rock and singer-s0ngwiter with just a touch of reggae. The acoustic based ballad “Never In My Life” features a unique arrangement that gives it a nice feel (again with a very slight reggae feel on the choruses). “Baby Could We Be Alone?” takes the reggae up a step or two. Now, don’t get me wrong, this is NOT a reggae album. But the influences are undeniable and very cleverly woven into a southern-rock sound. “Stalemate Blues” is a straight ahead, direct, standard blues work out with everyone locking together in a nice solid groove. Some great keyboard work from Chuck Leavell. “It Might Be The Rain” is a slow, moody, slinky piece of southern blues.

The band works through several more fine songs (especially “Strong And Weak” the closest thing to a “single” on the album), including a fun rendition of Allen Toussaint’s “Workin’ In A Coal Mine” (where they sound as if they are just having a ball), but the highlight of the album is the title track, the last song on the album. “Happy To Be Alive” is a minor masterpiece of a song: moving, infectious and altogether impossible to get out of your head. A poignant ode to coming of age, changing, growing and loving life throughout it all.

Happy To Be Alive is one of those albums that I hold near and dear, in part because it seems like my own little private secret. I’d love to see it released on CD, but that seems very unlikely. I’ve transferred by vinyl copy to CDR (it sounds great) and listen to it on a regular basis. I never get tired of it.