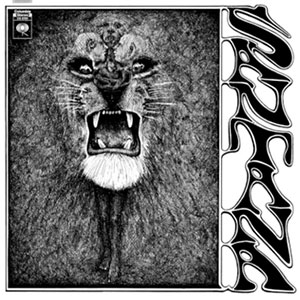 One of the most influential albums from my teen years was the original Woodstock album. A three record set it was something that me and my friends played over and over and over again. I can’t begin to count the number of levels it impacted me on: musical, lyrical, political, sociological, just everything. I was thirteen years old when Woodstock was held, fourteen when the album was originally released: in many ways an open vessel just waiting to be filled with new music, new ideas and new influences. I was first exposed to so many artists and bands through Woodstock: Canned Heat, Richie Havens, Country Joe And The Fish, Joe Cocker, Ten Years After, Sly & The Family Stone and especially Santana. Their performance of “Soul Sacrifice” is considered by almost everyone to be one of the highlights of the album. While I’m the first to admit that I’ve never been that “adventurous” when it comes to music (I tend to stick to pop, rock, folk, singer-songwriter and country) there are a few places where I’ve found things I like outside of what I might consider my “normal” parameters. I love Bob Marley and the Wailers, and though I doubt I have a single other reggae album in my collection, I have almost of of Marley’s, several in the deluxe “Legacy” edition. I’m completely mesmerized by the My Fair Lady soundtrack, though it’s the only “Broadway” album I’ve ever listened to. Santana is another perfect example. Their “latin-tinged” rock not the kind of thing I would normally be drawn to. I don’t listen to any other music even remotely like it. And on top of that a lot of the songs are instrumentals. I’ve always, since the very beginning, been drawn to words, to lyrics. I don’t listen to much instrumental music at all. But there is something about their first three albums that truly captivates and fascinates me. But, even with Santana, that’s about as far as I go, the first three albums by the original Woodstock-era line-up. I lose interest in Santana’s work after that, as the original band gradually changed and Carlos took the music in a more jazz oriented direction. And I didn’t care at all for Supernatural, his big “come back” album from 1999, which, amazingly enough, turned out to be the biggest Santana album ever, released thirty years after their debut.

Santana, the band’s debut, was released in August 1969, the same month that the Woodstock festival took place. Their performance at Woodstock and the inclusion of “Soul Sacrifice” on the soundtrack album had an enormous impact on sales for this album. It stayed on the charts for over two years, peaking at number four. It contained not only the studio version of “Soul Sacrifice” but their first big hit, “Evil Ways” which was a Top 10 single. I didn’t listen to Santana a whole lot during the actual time period when this music was released. I had two of those first three albums and of course I heard the hits constantly on the radio (“Black Magic Woman,” “Oye Como Va,” “Everybody’s Everything” and “No One To Depend On”). I hadn’t purchased anything on CD when, in 1998, Sony/Legacy reissued the first three albums with bonus tracks and so I scooped them all up immediately. What a treat it was to rediscover these three albums and spend some time really listening to them.

Santana is a tour-de-force from start to finish. From the very beginning you know right away you’re in for something special. Composed of seven members, the original line up consisted of black, Latino and white musicians. The unique sound they developed was unlike anything that came before or after. Centered around Carlos Santana’s stinging guitar, Gregg Rolie’s swirling organ and three, count ’em three, percussionists (two on congas and various other instruments and one on drums) the band coalesced together into an amazingly tight musical unit. The album begins with “Waiting” a classic Santana track that could have easily been another hit for the band. The congas kick in first, then the drums, then another set of congas, then the organ and finally the guitar. It’s the quintessential Santana sound.  Some bands take several albums to find their footing but these guys were red hot from the get go playing together with a cohesion and accord that some bands never find.

Songwriting was mostly a group affair as five of the nine songs on the album are credited to four or more of the band members. Only “Jingo” and “Evil Ways” were written by outside sources. There’s no filler on this album. Each and every one of the tracks is something special. In addition to “Waiting,” “Soul Sacrifice” and “Evil Ways” my other favorites are “Savor,” “Jingo” and “Persuasion.”

As bonus tracks this 1998 reissue features three of the seven songs that Santana played at Woodstock: “Soul Sacrifice,” “Savor” and “Fried Neckbones” the latter two performances having never been officially released before (“Fried Neckbones” has never been released in any other form that I know of). One listen and it’s readily apparent why the crowds at Woodstock were so blown away by these guys. When the drum solo ends on “Soul Sacrifice” and the entire band kicks back in it’s pure magic. Six years later Sony/Legacy would go on to rerelease this album yet again as a two disc “Legacy Edition” this time including the entire seven song Woodstock performance and a bunch of outtakes and alternate versions. I haven’t upgraded to that version yet, but it’s on my list.