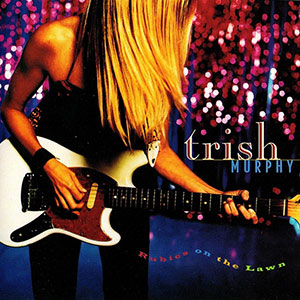 Rubies On The Lawn

Not too long after I moved from Austin to Nashville in late 1996 I ran across an album titled Crooked Mile by Trish Murphy. It was an independently released CD that had caught the attention of someone at the label I was working for, Koch Records. I was doing A&R for Koch at the time so I was given the task of finding out more about Murphy. A Texas singer-songwriter, this was her first real album (she’d released an independent, six song cassette titled Driving Home in 1995). Though I was pretty familiar with the Texas music scene (having lived there for twenty years and run my own small label for five) I wasn’t aware of Murphy before getting the copy of Crooked Mile. I knew after my first listen she was something special. Crooked Mile featured a handful of terrific songs (“Scorpio Tequila,” “Date With An Angel” and “Blue Tatto,” among others) and the rest were very, very good. I caught Murphy at shows in Nashville and Memphis and even travelled down to Austin to meet with her and her manager (who also happened to be her husband). I was very interested in signing her to the label. Her husband Charlie seemed to be a nice enough guy, but he wasn’t interested in an “independent label.” He was holding out for something big, a major label deal. He really believed in Murphy and was certain she had what it took to make it in the big leagues. Fair enough, though holding out for that big major label deal has often been the downfall of many a good artist. There’s a lot to be said for honing your craft and working your way up through the ranks. They finally managed to piece together something close to a major label deal by going through two other independent labels that had a distribution deal with Universal Music. So, in mid-1999 Rubies On The Lawn was released (on Doolittle Records via Slipdisc Records via Mercury via Universal Music). It was a giant step forward for Murphy and I was sure she was headed for very big things.

Whereas Crooked Mile had been a rootsy, Texas country-rock flavored affair, Rubies On The Lawn was much more of a “rock” record, though Murphy’s singer-songwriter roots were prominently on display. “Outsider,” the leadoff track and one of the standout songs on the album, announces this as much from the very first note. Murphy sings of paralysis, confusion and “would be friends” (a veiled account of trying to “make it” in the music business?) as the band shimmers behind her in a radio perfect confection of ringing guitars, pounding drums and thumping bass. “Me Behind The Wheel” continues down the same road as Murphy tries to make sense of life on the road. It’s easy to make comparisons of Murphy to other strong, determined women songwriters such as Lucinda Williams, Melissa Etheridge, Alanis Morissette and especially Sheryl Crow. And while she has clearly been influenced by many (if not all) of these women, she brings a unique style and attitude to her music, her songs, her lyrics and especially her sound that declares her individuality in no uncertain terms. A rocking, raved up, ravaged cover of “These Boots Are Made For Walking” does a glorious job, in one fell swoop, of paying homage to not only one of the earliest assertions of female independence and “I ain’t taking shit from any man” attitude, but to all the women who helped shape her sense of herself as well.  An exuberant, sparkling little slice of pure pop-rock, “I Know What You Are” makes the Crow comparison hard to avoid. A glorious three-minute nugget that would fit perfectly on Crow’s C’mon, C’mon album, it’s one of the tracks on the album that, in a better world, would have been all over the radio during the summer of 1999.

Even most of the ballads, such as “Go There” and “Soul’s Day” and are given a loud, muscular, noisy setting. The production by Jim Ebert can be a little overbearing occasionally, sometimes even on the verge of drowning Murphy out, but overall it suits these songs, and especially her voice, quite well.

If there’s one song on the album that should have been a hit it’s “Somewhere Else” a track that would sound just perfect blaring out of your radio as you tear down the freeway, lost somewhere in the heartland of America, bound for who knows where. Catchy and infectious as it is though, my favorite song on the album has to be “Johnny Too Blue.” Channeling a “Subterranean Homesick Blues” rhythm Murphy recounts the story of her dysfunctional, unbalanced Vietnam vet uncle. She paints a vivid, heartbreaking portrait of a damaged soul just trying to survive. Murphy’s storytelling abilities are in abundant display throughout the album, but nowhere more so than on this track.

And just when you think you’ve got Murphy nailed she comes along with a curveball that knocks you out of the box. “Vanilla Sun” is a stunning, beautiful, almost mesmerizing ballad unlike anything else on the album. Over a thick layer of acoustic guitars and quirky percussion effects Murphy’s voice soothes, seduces and subdues the listener. A stunning orchestral instrumental version of the melody acts as a sort of coda to the album.

I saw Murphy play an in-store appearance at Tower Records in Austin during SXSW 1999. It was a fantastic performance. She was at the top of her game. She sounded great, the band was hot, the songs were killer. I remember talking to her and Charlie afterwards. “I want postcards from the top,” I told them, “cause that’s where you’re going.” It never happened. She seemed to have everything in place, but it’s an old, old story. I can’t begin to list the number of great artists who “should have made it big” in the music business but didn’t. Maybe it was money. Maybe no one at the label believed in her. Maybe radio just didn’t get it. Who knows why. But it seems that all of the air went out of the balloon after Rubies On The Lawn failed to deliver. It was as if she had put so much energy, time, hope and ambition into that one big shot for the top that she just didn’t have it in her to pick up the pieces and try again after that. She quietly, and independently, released a live acoustic album in 2001, Captured,  and another studio album, Girls Get In Free, in 2005. Both were very solid efforts, with a lot of great songs, but neither quite captured the magic of Rubies On The Lawn. To the best of my knowledge she’s still playing in the Texas area, though when I occasionally check her website I don’t see many tour dates and no mention of any new music. She’s a very talented songwriter and five years is way too long to wait for a another album. I hope to see something new from her soon.