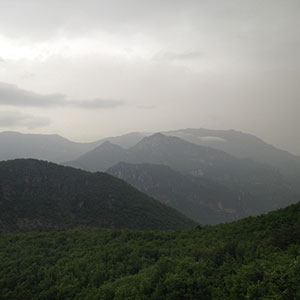 Rain! Wind! Thunder! Lightning! Cold! None of these things mix especially well with cycling in the French mountains. I checked the weather forecast before I left Vence this morning and it said a 40% chance of rain in the afternoon, going up to 70% by early evening. I was headed out at about 9:30 and had a 2 to 3 hour ride planned, so I thought I should be OK. I was wrong. I was very wrong. When it comes to weather in the mountains, you pay your nickel and you take your chances.

Whenever I’m in Vence the second ride I usually do (see my first ride post) is a 35 mile loop that takes in the Col de Vence and seven wonderful mountain villages: Coursegoules, Bézaudun, Bouyon, Le Broc, Carros, Gattières and Saint-Jeannet. It’s a route I’ve done many times over the years. I like it because it includes a nice climb (up the Col de Vence), some beautiful mountain countryside and those seven villages.

As I headed out the door today the sky was completely overcast. No sun anywhere. But the clouds did not look very threatening at all. Except, maybe, I thought, a little off in one direction where they seemed a bit dark. I actually went back into my apartment and grabbed my light windbreaker, a move I was very glad I made a short time later. At the summit of the Col de Vence. I should have gone back down the way I came!

The Col de Vence is a 10km climb that begins right at the edge of Vence. It averages about 6% to 7% from the Vence (the south) side. Not real steep and not real long by mountain standards, but still a very nice climb. Enough of a climb to let you know you’re working. I was actually quite happy with the overcast skies today as the terrain is mostly treeless and pretty barren after the first three kilometers. On a sunny, summer day it can get really hot going up this mountainside. With the overcast skies and temperatures in the mid 60s it was very comfortable this morning. I took it at a pretty moderate pace, keeping my heart rate around 135bpm to 145bpm at the most. I passed about 10 or 12 cyclists coming back down as I was going up. I would later remind myself, “they were the smart ones.”

When I reached the summit I stopped for a quick photo and then headed down the other side to Coursegoules. I noticed some pretty dark clouds off to the west, but I was hoping they would stay away from me as I was headed east. The descent down the north side is fairly run of the mill, not nearly as steep as the south side. In fact, in a few places it pretty much levels off for awhile. As I was approaching Coursegoules the skies really began to darken and thunder began making the presence of the impending storms quite apparent. Just as I was getting into Coursegoules the skies opened and the rain began. I quickly ducked into a small roadside garage that was open to wait out the worst of it. It rained really hard for about 15 minutes and then it began to lighten up. Once it had subsided to slight drizzle I decided to head out. I put on my windbreaker and hit the road. Hiding from the rain in a little garage in Coursegoules.

The rain had pretty much stopped, but, of course, the streets were very, very wet. As was I in a very short time. From Coursegoules to Bézaudun is about 6km and mostly slightly downhill. It wasn’t but a few minutes before the rain began again. By now I was soaked through and through and there wasn’t much point in stopping anywhere, I had to just push on through and hope that the rain would stop, the sun would come out and everything, including me, would dry up. No such luck today. Even though my windbreaker was completely soaked it still helped a little in holding in some heat and keeping me from getting too cold.

Normally I like to stop for a few minutes in each of the villages and take a look around, do a little exploring. Not this time. I passed by Bézaudun and headed on towards Bouyon, another 6km, again mostly slightly downhill. I would have actually much preferred to be climbing as it keeps you much warmer in the rain. Going downhill you’re not working as hard and the wind is stronger. In addition to that you have to deal with winding, narrow, slick mountain roads. I was being very careful to say the least.

Through Bouyon, on to and through Le Broc (8km) and Carros (4km). No let up in the rain, if anything it got worse. From Carros to Gattières (6km) is fairly flat, but once you pass through Gattières on the way to Saint-Jeannet and then Vence, you’re on a very busy road which was no fun at all in this rain. Cars and trucks whizzing past, just hoping they see you there on the side of the road. I made it back to Vence without incident (well there was one little slick spot where I almost went down, but I managed to keep the bike up thankfully) and the ride was over. Only 35 miles, but whew, what a morning. I truly enjoyed the climb up the Col de Vence, but everything after that was pretty sketchy.

Luckily, I’ve only been caught out in the rain while riding in France one other time. And, as fate would have it, it was on the exact same route! Several years back I had an almost identical ride, except that time the rain began at the top of the Col de Vence and let up before I finished.