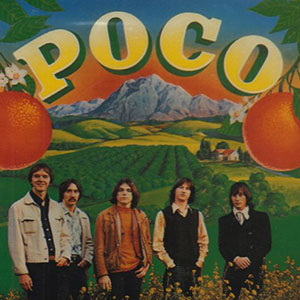 I never got into Poco. Which is very, very strange, as on paper they are a perfect group for me. I’m a huge fan of Buffalo Springfield, The Eagles, The Flying Burrito Brothers, CSNY, The Byrds, Linda Ronstadt, Emmylou Harris, Gram Parsons… well, you get the picture. I really l like the two Souther, Hillman, Furay albums released in the mid 70s. But, Poco, they just never did it for me. I tried. I picked up an album now and then, gave it some listens, nothing. I bought a double CD best of package titled The Forgotten Trail (1969-74) when it was issued on CD in 1990. I figured, OK, here’s two discs of nothing but the best stuff, this should get me going. Nothing.

I recently read an excellent book titled Desperados: The Roots Of Country Rock by John Einarson. A really good read, outlining the birth of “country rock” and the LA scene in the mid to late 60s and early 70s. Poco was certainly a very integral part of that whole scene and they are covered in some depth in the book. So, I figured what the hell, let me pick up a few albums and see if I can finally get into them. Amazon had most of their early CDs for $7 or $8 so I ordered some. First I listened to Pickin’ Up The Pieces, their debut album. There’s some stuff on there that I like, but still, it’s not an album I see myself coming back to very often. So, now I’m listening to this, the 1970 self-titled follow up. Nope, it just doesn’t do anything for me. Sad but true.

For whatever reason, this “branch” of the early country rock tree seems to leave me flat. I never listened to any Loggins & Messina or solo Richie Furay either. Something about these two guys misses the mark with me. I’ve got two or three more CDs that I still plan to give a couple of good listens to, maybe something will stand out on those.