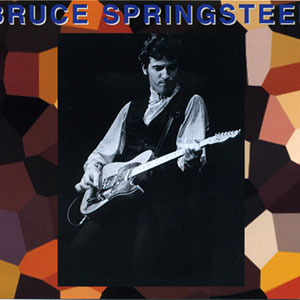 I love bootlegs. I have hundreds of them. Many, many hundreds. Most of them are Bob Dylan and Bruce Springsteen. But I’ve got them from dozens of artists including Neil Young, Jackson Browne, Elliott Murphy, Buffalo Springfield, Joni Mitchell, James Taylor, Sheryl Crow and many, many others. Most are live concerts, but many are also studio outtakes and other rarities. The first bootleg I ever bought was a two disc vinyl copy of Bob Dylan’s Great White Wonder on the Trade Mark Of Quality label. Released in 1969 this is famous for being the first “real” bootleg of the rock music era. It’s still one of the most famous bootlegs of all time. Original pressings of this are extremely rare and valuable. It’s estimated that the material on these two albums was repressed over 50 times in separately, identifiable versions. Hell, you could make a collection just out of versions of this bootleg. The album contained material from the “Minnesota Hotel Tape” in 1961, Basement Tape songs (not released at the time), outtakes from Another Side Of Bob Dylan, The Times They Are A-Changin’, Highway 61 Revisited and more. Wow. I bought a few other vinyl bootlegs in the early 70s, but was generally disappointed in the quality, especially of the live shows, so I didn’t really pursue them much. It was Springsteen’s 1978 Darkness On The Edge of Town tour that really turned things around. A handful of his shows from this tour were broadcast on FM radio, in their entirety, and when the bootlegers got ahold of these the floodgates opened wide. I had been lucky enough to see two of the 78 shows (still my all time favorite tour by any artist). Sometime in 1979 I picked up a copy of Pièce de Résistance, a recording of the September 19, 1978 show at The Capitol Theater in Passaic, New Jersey. Unbelievable. Fantastic show. Great quality sound. Who could ask for more? I was hooked. Remember there was no live Springsteen commercially available at the time.

There are really four separate bootleg eras. First came vinyl. I continued to pick up Springsteen and a few Dylan vinyl bootlegs. But it was the second era when all hell really broke loose. The era of the CD bootleg. They started coming fast and furious in the late 1980s. Really unbelievable stuff. You couldn’t buy them, of course, at your local record store. I found them at record conventions and I ordered a ton of them from mail order companies in Europe. For awhile, or so the story goes, they were actually legal in various European countries, and especially in Italy. Great Dane and other labels advertised in magazines. You could place an order with a credit card and four to six weeks later a batch of bootleg CDs would show up in the mail. I probably ordered well over a hundred CDs this way. All at about $20 per disc. Meaning a 3 disc live set was $60. Yeah, I spent a lot of money on those. Generally it was well worth it. In the late 90s (when I lived and worked briefly in New York) I would make weekly rounds of three or four record stores in Manhattan that openly sold bootleg CDs. Prices were still the same, but I didn’t have to wait four to six weeks.

The advent of CDRs really changed things once again. Suddenly websites like dylantree.com sprang up. People would “tree” bootlegs. One person would make ten copies and send them out to 10 collectors who would each do the same thing and then send back a different bootleg to the person who sent them the new one. You could sign up at various places for these trees as either a “branch” or a “leaf.” I always signed up as a branch and as such I would usually get at least 5 or 10 trades back from my leaves (they’d send you their list and you’d pick what you wanted.) The fourth era is upon us now with broadband and bittorrent. Nowadays you just log onto a website and download what you want. While you’re downloading you’re also sharing the stream with others who are doing the same so that many folks can download the same source faster. Depending upon how many “seeds” there are you might be able to download an entire CD in as little as an hour. Sometimes it can take considerably longer. One of the best things about the bit torrent era is that no one is profiting from this. The music is being shared freely by fans and anyone who tries to sell it is shunned. It’s taken one of the “moral” issues out of collecting bootlegs.

Passaic Night is generally considered to be one of the best ever performances of Bruce Springsteen and The E Street Band. This is a band at it’s very creative and energetic peak. Many would argue that Bruce and the boys are still reaching new peaks and in some ways it’s hard to argue with that. But the pure passion, hunger and fire from the 1978 shows will never be topped. They had something to prove and man did they ever deliver. Bruce never pushed himself or the band so far and so hard before or after this tour. This was long before Bruce was a superstar (that wouldn’t come for another 6 years). This show was the first of three at this intimate theater on home ground in New Jersey. The band had been out on the Darkness tour for four months already. They were untouchable. From the opening blasts of “Badlands” to the closing whirlwind of “Devil With The Blue Dress On/Good Golly Miss Molly/C.C. Rider/Jenny Take A Ride/Raise Your Hand” this three hour show is one highlight after another. Lots of Darkness songs, several new, as yet unreleased songs destined for The River (“Independence Day” and “Point Blank”), the unreleased “Fire” and “Because The Night,” the definitive version of “Backstreets” with the “Sad Eyes” interlude and lots, lots more. Some material from the 1978 tour is available on the official Live 1975-1985 box set. But, if you’ve never heard a full 1978 show from start to finish you haven’t heard the best of Bruce Springsteen. Listening to these shows still gives me goosebumps and shivers. They are almost too good to believe. There are also great recordings from other shows broadcast live on radio including Los Angeles, Cleveland, Atlanta and San Francisco.

I won’t go too much into the “morality” of bootlegs here. I’ll save that for another post. Let me just say if the labels and the artists would simply released more of this stuff they could put a huge dent in the trading. The Grateful Dead know this. Dylan has done the right thing with the Live 1964, 1966 and 1975 releases and should continue to put out more (1965, 1974, 1978, 1979 and 1980 to start with). Springsteen released the 1975 London Hammersmith show recently and that’s a good start. He’s also been good about releasing live recordings from almost every recent tour. But the archives are what we’re all waiting form. Neil Young has recently released two early 70s shows. I buy ALL this stuff, and so do the other fans I know that collect bootlegs. Put out the archival stuff and we’ll buy it. With the internet, iTunes, etc. these guys should be putting out WAY more of these kinds of things. WAY more.