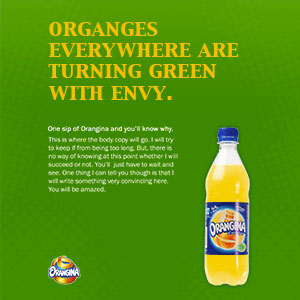 I don’t know what it is about this drink, but I’ve never found anything that refreshes me better and faster during or after a long ride than Orangina. I can drink a full 12oz can in a few seconds, literally. It’s delicious, it goes down smooth and easy and it really quenches my thirst.

I first discovered Orangina during my first trip to France in 1973 and I really only drink it when I’m in France, but when I’m there I drink a LOT of it. It’s a lot like a typical carbonated soda, but, to me at least, much, much better. I love to throw a really cold one down during a ride and after a ride I can drink two or three easily. It’s great with pizza and pasta as well. I buy the cans by the six pack when I’m in France. They’re very inexpensive at grocery stores and markets, but restaurants tend to charge ridiculous prices (at least compared to what you can buy it for elsewhere). You can get cans, plastic bottles, or the classic, famous little pear-shaped glass bottles.

These days there are a variety of Orangina products (Regular, Lite, Rouge) and they all contain at least 12% citrus fruit juice, 10% orange and 2% lemon, grapefruit and mandarin. Additionally, they contain 2% pulp and zest (though I think you can still get a version without pulp). The regular variety is my favorite, though I’ll drink one of the Rouge (red) once in a while for a change of pace. The drink was invented in 1935 by a Spanish pharmacist who sold the concept to an Algerian who launched it in Algeria. The Orangina trademark was registered in 1936 but it wasn’t until 1951 that it became easily available in France. These days it’s available almost all over the world, including the US. It’s not hard to find here (it’s available locally here in Nashville at Harris-Teeter grocery stores), but it’s certainly not as prevalent as it is in France, where almost every store and restaurant carries it. Even though I can find it here I don’t drink it in the US. I guess I just like to keep it as one of French experiences.