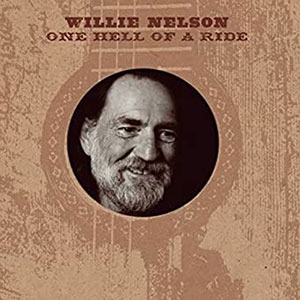 One Hell Of A Ride

I met Willie Nelson one time. It was a big deal to me back then. It was backstage at the old Austin Opry Austin at a Steve Goodman concert in 1977. I was working at Zebra Records, a long gone record store in Austin. From Willie To Lefty had just been released and I told him we were doing really well with it. Willie was certainly a star at this point (especially in Austin) but nowhere near the icon he is today. He was nice enough, but, of course, I was just one more faceless person to meet and shake hands with. There were probably dozens of similar situations every day for him. It might have meant something to me, but it certainly didn’t mean anything to him. Over the years, as I had more and more opportunities to meet some of my musical heroes, I began to realize what a strange and pointless activity it was. It lost its magic rather quickly. In fact, I actually went out of my way sometimes to avoid meeting them.

One Hell Of A Ride is the latest Willie Nelson box set. There are several others. This one is being marketed as the first one to feature tracks from every stage of his career, from 1954 to 2007. Now, all and all, I’m a big fan of box sets. I have way too many. But this one, for me at least, is pretty superfluous. I guess it would be a great package for someone who wanted an introduction to Willie’s music, or who had only a few albums. But face it, when you try pack 53 years of music into 4 discs (100 songs) you’re going to have to make a lot of decisions about what should be included and what shouldn’t. I mean, that’s not even two songs per year, and for someone who’s released at least 92 albums in that time we’re talking about one song per album. So the process of choosing the songs for a collection like this is going to be pretty selective and certainly open to debate. I mean 4 tracks from 1993’s Across The Borderline and only 1 from Willie’s breakthrough release Redheaded Stranger? Come on. Willie has made a lot (and I mean a lot) of great music in the last 53 years, but there’s been quite a bit of filler as well. I mean how could there not be with 92+ albums? There are a lot of great tracks on this box set, no doubt about that. But there are a lot of questionable inclusions as well. But that’s the nature of a project like this.

Now, if you want a great box set of Willie Nelson music pick up The Complete Atlantic Sessions (3 discs). Willie only made two albums for Atlantic, Shotgun Willie (1973) and Phases And Stages (1974), but both are among his very best work. Classic country albums. The box set includes tons of unreleased tracks, including an entire alternate version of Phases And Stages, as well as a live third disc recorded in June 1974 at the Texas Opry House in Austin. 11 of the 16 tracks were previously released on the The Classic, Unreleased Collection box set. But the other 5 are previously unreleased.

One more thing: This new box set features the covers of the 92 albums I mentioned above. It’s astounding how awful most of these covers are. I mean awful. When you see them all together it’s just fascinating. For a guy that makes such great music his albums have rarely been represented well with good cover art. For every decent album cover (Teatro, Spirit, Red Headed Stranger, Phases And Stages) there are at least a half a dozen horrible ones (Always On My Mind, Angel Eyes, Island In The Sea, Clean Shirt and, maybe the worst, Rainbow Connection).

Added June 18th, 2008: I bought my copy of this at Best Buy, and it came with a Bonus DVD. I don’t know if all copies contain the Bonus DVD or if it was a Best Buy “exclusive.” I finally got around to watching it today and it’s a nice little six song excerpt of Willie’s performance on the PBS Sessions At West 54th. To the best of my knowledge this has never been released commercially, so it’s nice to have. Sessions At West 54th was a live series, similar to Austin City Limits or Soundstage, but in a very small, intimate environment. More like Unplugged I guess. I think this was taped in 2000 and Willie and the band are in typically fine shape. Shelby Lynne guests on a couple of songs.