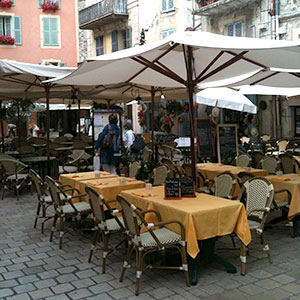 Arrived in Nice around 1:00 in the afternoon about three hours later than when I was scheduled to arrive, so overall not so bad. I checked with baggage people there and they told me my bike and bag would be coming in that afternoon around 3:00 or 3:30. Great news, as the London folks had told me they wouldn’t arrive until the next day! I headed over to Terminal 2 to pick up my car at Europcar. There was a very long line, but fortunately it moved at a reasonable pace. I was a little concerned that my bike box wouldn’t fit in the car, but everything was great. I got a fantastic car, almost brand new. It is a Renault Megane, a four dour hatchback and very modern. No key, just a credit card sized piece of plastic that you slide into the dashboard and a button that you push to start the engine. I got it at a great price, just $200 USD a week, with unlimited mileage. Plenty of room in the back for my bike box once I put the two back seats down.

I headed off for Vence. I’ve ridden there several times on my bike, so I know the route. It’s only about ten miles from the Nice airport to Vence, so I was there in twenty minutes or so. However, I could not, for the life or me, find my hotel, La Closerie des Genets. I searched and searched, going back and forth down the street I thought it should be on. Finally, I decided to park in a parking garage and ask someone for help. But as I was walking up the street I found the hotel, tucked down a side street. The door was locked and no one answered. I was finally able to rouse the owner after some more knocking and he checked me in.

La Closerie des Genets is a fine little hotel if you are looking for something inexpensive and don’t require much. My room is very small, there’s not much in the way of drawers and storage areas. No desk. No phone. But, it’s clean, quite and cheap. I’m only paying 40 Euros per night, which is very, very good. So, I can live with the lack of extras as I’m trying not to spend too much money on this trip. There are certainly better hotels in Vence, but even the next step up is about twice the price.

I got settled in, upacked most of the carry on stuff I had with me and gave the British Airways lost luggage number a call. They said that, yes indeed, my luggage and bike had arrived at the Nice airport. I asked if they were going to deliver it to me that evening. Well, they couldn’t really say. I asked if someone could call me and let me know. If they were not going to then I’d come and get it myself. They said they would. About three hours later, no word. I called again. Same runaround. They weren’t sure when it would be delivered, but they’d have someone call me and let me know if they were not going to deliver today. An hour later I realized no one was going to call me and there was no telling when they’d get around to delivering my stuff. It was almost 7:00PM by now, so I hopped in my car and headed for the airport. Picked up my bike and bag and headed back to Vence, getting very tired now, as I’d only had about 2 hours sleep in the last 24 hours.But, I was very happy to have my bike and luggage.

Back at the hotel I put my bike together (for the most part), gave Carole a call and went to sleep.