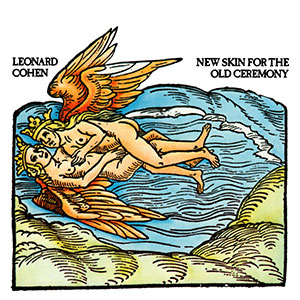 New Skin For The Old Ceremony

I have two close friends whose musical opinions and tastes I value very much, both of whom just can’t stand Leonard Cohen. He’s one of those artists that people seem to love or hate (no pun intended). There’s not a lot of middle ground when it comes to Leonard. Personally, I can’t get enough of the guy. He’s been one of my very, very favorite songwriters since I was in high school. You can’t compare Cohen to anyone. He’s one of a kind. A true poet. Some people have a problem with his voice and his singing, but not me. But then again, I tend to love singers that others don’t seem to appreciate: Bob Dylan and Neil Young come to mind. I discovered him via his second album, Songs From A Room (still one of my favorites). That album, along with his first (Songs Of Leonard Cohen) and third (Songs Of Love And Hate) have recently been reissued by Columbia in limited edition, deluxe, hard-cover digipacks with new liner notes, unreleased tracks and rare photos. I was looking through my Cohen CDs the other day searching for something to listen to. I’ve got all his albums (including a couple that have never been released in the US, only in Europe) and a dozen or so bootlegs. But the one I was looking for wasn’t there. New Skin For The Old Ceremony. Hmm. Maybe I never got that on CD for some reason. I’ve got two copies on vinyl. It was one of those albums that was released with one cover originally and then the cover was changed on subsequent pressings (Bob Dylan’s Blood On The Tracks is another great example of this). So, of course I had to have both pressings. So I checked on Amazon and found the CD for $5.97. Sign me up! Hell, I’ll buy almost anything for $5.97.

New Skin For The Old Ceremony was Cohen’s fourth studio album (he followed the third with a fantastic live album, Live Songs). It doesn’t seem to be one of his better known albums though. I find it downright mesmerizing. The songs themselves were not much of a departure from his earlier writing, but the production certainly was. While his first three albums had been sparse “folk” efforts, mostly just him and a guitar, this was a much more realized affair with a full band (and even horns). Songs like “Lover Lover Lover,” “There Is A War,” “Who By Fire” and, especially “Is This What You Wanted” were direct, in your face performances, unlike anything Cohen had done before. Lyrically he was mining familiar territory, relationships of the heart, soul and body (“You were KY jelly, I was vasoline”), but there was a new sense of energy and forcefulness, not just in the music but the words as well. “Chelsea Hotel #2” is probably the best known song from this album, an almost “throwaway” piece about Janis Joplin (“I remember you well in the Chelsea Hotel, that’s all I don’t even think about you that often”). I have no idea where this album stands in the ranks of the true Cohen followers (which are legion), but I listen to it a lot more than his more well known first or third albums.

I always thought it would be fun to be a DJ. I could play the music I loved and cherised and people would have to listen to it. I have a sort of “missionary” side to me when it comes to the music I love. I want to turn everyone I know onto it. I want them to like it as much as I do. I want them to see the magic and the salvation in it. A good song can save your life. Of course I found out a long time ago DJs these days don’t get to play the music they want. Maybe back in the 60s it was different. But it certainly hasn’t been that way for a very long time. I did spend part of a summer once in Telluride, Colorado, working as a dishwasher and living in a tent on the side of the most magnificent mountain I’d ever seen. There was a little “community” radio station and I managed to get signed up as a DJ for a short time, mostly filling in for other people who couldn’t make a shift. It was great. I played exactly what I wanted, no one told me what to do or what to play. I played everything from Bob Dylan to the Eagles to John Prine and a lot of stuff I was certain no one had ever heard before, stuff I can’t remember anymore. That was almost thirty years ago. And of course, Leonard Cohen. Only to have my good friend Bill (one of the two I mentioned at the beginning of this post) come up to me later and ask why in the hell I was playing that crap. What crap I asked innocently, all the time knowing he was speaking about Cohen. He described it as the sound of animals dying. There you go. Just like the religious missionaries know, you can’t save them all. But at least I tried.

Cohen has continued to release new albums on a semi-regular basis. Most of them would get five star ratings from me. I still listen to almost all of them. He was inducted into the Rock And Roll Hall Of Fame this year and is touring this summer for the first time in fifteen years.