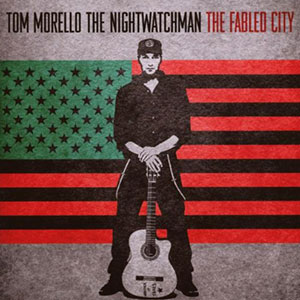 OK, a couple of things:

1. These are my “favorite” new albums released in 2008. I refrain from using the term “best new albums” as that’s too subjective of a term in my opinion. These are simply the records I liked most this year. I’m not saying they’re the best.

2. I’m sure there were other albums released this year that might have made this list but I simply haven’t heard them yet. This is what I’ve heard this year.

3. They are pretty much in order.

1. The Fabled City by Tom Morello The Nightwatchman
Wow. This album just completely knocked me out. I have one CD by Rage Against the Machine (The Battle Of Los Angeles) but I’ve never listened to it. Maybe I should. I bought this album after hearing Morello’s duet with Springsteen on “The Ghost Of Tom Joad” from the online only release Magic Tour Highlights. Great singer-songwriter rock. Passionate. Moving. My favorite album of the year.

2. Volume One by She & Him
A wonderful surprise and a very close runner up for my favorite album of the year. I wrote about this album here. A really, really terrific release with lots of minor pop gems. Let’s hope there really is a Volume Two coming as the name implies.

3. Tell Tale Signs: Rare And Unreleased 1989-2006: The Bootleg Series Vol. 8 by Bob Dylan
OK, it’s not “new” material, but it is a new release. Outtakes, alternate takes and live tracks that once again prove Dylan is either: a. the worst judge of his own material when it comes to picking tracks for albums; b. an honery son-of-a-bitch who likes to leave great tracks on the cutting room floor just to piss off his fans; or c. just doesn’t really worry too much about what goes on each album what doesn’t. Either way, this two (three if you’re willing to shell out $100 extra bucks for the deluxe version) disc set is ample evidence that what Dylan doesn’t put on an album completely blows most people’s released material out of the water. I wasn’t a big fan of Modern Times or Love & Trust (sure, I liked them but not the way some folks did). The material on this set which comes from those two albums is, to me, much, much better than what was officially released.

4. Life Death Love And Freedom by John Mellencamp
The first time I heard this I thought Mellencamp must be terminally ill. Lots of songs about sickness, death, the meaning of life, etc. His best album in 20 years. I wrote about it here.

5. Detours by Sheryl Crow
A very welcome comeback after Wildflowers. One of Crow’s strongest efforts ever, full of great and memorable songs. I wrote about it here.

6. Coal by Kathy Mattea
A complete surprise to me. I’ve never bought or listened to any Kathy Mattea albums before. She always seemed like just another bland Nashville female singer to me. A friend gave me a copy of this CD and it blew me away. Beautiful acoustic renditions of “coal miner” related songs produced to perfection by Marty Stuart.

7. Time The Conqueror by Jackson Browne
Certainly not one of his best albums ever (we have to go back to the 70s for those), but a very strong release nonetheless. I haven’t listened to it a whole lot, but each time I do I find something new I like about it.

8. Fearless by Taylor Swift
Hey, what do you expect from someone who also loves Shania Twain and Eddie Rabbitt. I don’t think the songs are quite as good as those on Swift’s first album and I find the production a little monotonous. Still it’s a superb display of what I’d call country-power pop shot full with teen angst and young girl blues balanced with all the hope, magic and promise that comes with young love. As the title implies Swift brings a sense of empowerment, spunk and toughness to the table that is so often lacking in other young singers. She ain’t nobody’s victim. Break her heart and you’ll probably live to regret it.

9. Mudcrutch by Mudcrutch
Not really much of a surprise here. I’m a huge Tom Petty fan and this could easily be mistaken for a new Tom Petty album. He wrote the majority of the songs and the sound is very much in the vain of his work with the Heartbreakers. Still, it’s great to see him reaching back into his past to hook up with his old bandmates and there is a freshness here that has been missing from his other recent releases. And the songs are some of the best he’s written in a long time. Some great covers as well.

10. Misfit Scarecrow by Sammy Walker
At first I was disappointed in this release. There was just so much to live up to. Sammy’s two albums from the seventies on Warner Bros. are two of my all time favorite albums ever. It’s been almost fifteen years since his last release (1994’s Old Time Southern Dream). But with repeated listens the songs on this album won me over. The record label really dropped the ball on this one. You still can’t buy it at Amazon.com. It wasn’t available at iTunes for quite some time after it was released. Why bother releasing an album like this if you’re not going to make it easily available to the public? It’s not like there’s a huge Sammy Walker fanbase out there waiting for it.