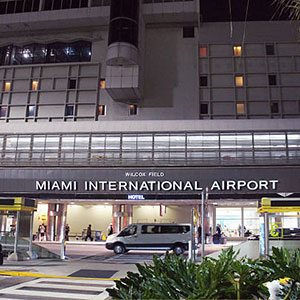 Well, this is not good. Just as we were about to land in Miami the pilot aborted the landing and took us to Ft. Lauderdale instead. Apparently sudden winds at ground level had made it unadvisable to land. Now normally they would just circle around awhile until it was safe to land, but, as the pilot explained, we had used up all of our fuel flying around storms between Nashville and Miami. So, off to Ft. Lauderdale we went to refuel. We were on the ground there about an hour and then a 10 minute flight back to Miami. By the time we landed, deplaned down stairs, collected luggage and took a shuttle bus to the terminal it was now 5:10 and obviously I was never going to make my connection to London at 5:15. I went to the British Airways desk and asked them what to do. They explained that the flight had already left and they would try to put me on “standby” for the next flight. At this point I had to ask myself why I was being put on “standby.” To me I should be given priority, as they were the ones who caused me to miss the first flight. But, I kept my questions to myself for the time being. The ticket agent phoned someone and then said suddenly, “It’s still here. They’ve been slightly delayed, but they are leaving any minute. You need to run as fast as you can to the gate and they will try to hold the plane for you.” OK.

Unfortunately, I had to go to a new terminal and I had to go through security again. The ticket agent at least waved me to the front of the line. And then it was a mad dash through three terminals. I arrived in time, they put me on the plane, covered in sweat and at almost immediately we were off. It was apparent though that my bike and my luggage did not make the flight. The best thing to come out of all this was I found myself in a three seat section with on one else! This is almost unheard of on overseas flights these days. They are almost always completely full. What this meant was that I could lay down and sleep on the flight, a true luxury, which is exactly what I did. I managed to get a couple hours of sleep I think, it’s not easy to sleep on those seats.