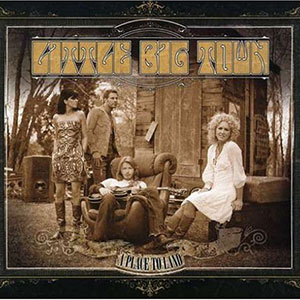 A Place To Land

Living in Nashville I had of course heard of Little Big Town. They put out a self-titled album on Monument in 2002 which went nowhere. But then they struck gold (and platinum) and had amazing success with their second album (The Road To Here), and on an independent label (Equity Music Group) no less.  That’s not an easy thing to do in Nashville, though times do seem to be changing. I have never heard The Road To Here, but I saw the band on the CMT show Crossroads with Lindsey Buckingham. Crossroads is a show that pairs up a “country” artist with a “rock” artist (for the most part): Bon Jovi and Sugarland, John Fogerty and Keith Urban, Sheryl Crow and Willie Nelson, etc. And I gotta say, these guys were rocking, especially on the Fleetwood Mac songs they did with Lindsey. In what universe this band would be considered a country band, I don’t know. Oh, this one I guess. So, anyway, I saw this record on sale at Best Buy for $8 and decided to give it a try.

Like I say, to me this is much more of a pop album than a country album, and a pretty good one at that. The Fleetwood Mac influences and comparisons are very obvious and front and center. I do find it very interesting that they are much more of vocal group than a real band. The two guys play acoustic guitar on only one track and one of the women plays tambourine on two tracks. Other than that it’s all studio and session players. And damn good ones at that. The production and musicianship on this are first rate. Wayne Kirkpatrick does a bang up job producing their music, getting the sound (and especially the vocals and harmonies) just right. This sounds great turned up real loud. They do, at least, write their own songs, having penned all but two.  “Fine Line,” “That’s Where I’ll Be” and “I’m With The Band” are my favorite tracks.

I haven’t spent enough time with this album yet to really say much more on how I feel about it (this is just my third listen). I like it a lot so far though and will keep it in my “current favorites,” give it some more spins and let the music sink in. Maybe I’ll even go back and pick up their last CD.

My friend Torne White did the artwork for this CD and my friend Phil Madeira plays B3 on it. It’s also interesting to note that in April it was announced that the band was signing with Capitol and taking both their Equity records with them. This can’t be a good sign for Equity Music Group as this group and these two albums were by far their biggest successes, though A Place To Land doesn’t seem to be selling anywhere near as well as The Road To Here. I don’t think it’s even gone Gold yet.