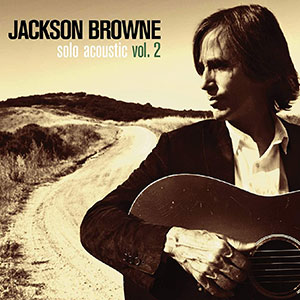 Jackson Browne is one of the only artists to ever release a live album of completely “new” material, Running On Empty. The most famous other example is Neil Young’s Time Fades Away (still not available on CD!). Emmylou Harris did something almost the same with Last Date (the songs weren’t “new” though she had not recorded them before). Most artists take the opportunity to release live albums as a kind of “greatest hits” package. It takes a lot of courage to put out a live album with songs your audience has never heard previously. Yet for Jackson and Neil it paid off quite well. Running On Empty is one of Jackson’s best loved albums and Time Fades Away is a classic, though not as popular with Neil’s mainstream following as it is with the die hard fans. Jackson, either solo, with David Lindley as a duet, or with a full band, is a great performer. (I have an absolutely fantastic four disc bootleg of various live performances from 1973 to 1997 of just Jackson and David titled For Everyfan. Drop me an email if you’d like a copy, I’m always happy to share this kind of stuff.) I first saw him live with the Pretender band in 1977 in Austin, Texas at the old Palmer Auditorium (it’s gone now).

Solo Acoustic Vol. 1, released in 2005, was a treasure trove of intimate Jackson Browne performances. Jackson as a unique rapport with his audiences. They love him. He can pretty much do nothing wrong as far as they are concerned. Check out the customer reviews of Solo Acoustic Vol. 1 and Vol. 2 on amazon.com: 88 of the 121 reviews are 5 star with another 22 coming in at 4 star. Vol. 1 featured a well balanced selection of some of his most popular songs from throughout his career (though mostly featuring songs from the 70s and 80s albums). “These Days,” dates back to the very beginning of his career (famously covered by Nico on her album Chelsea Girl in 1967). It was clear from the title (Vol. 1) that more was to come, and now we have Vol. 2. It’s a perfect companion to the first volume though not quite as fulfilling due to the song selection. Vol. 2 concentrates more on the later half of his recorded output (only two of the songs date back to his classic 70s albums). Every artist has their own idea of what constitutes their best material and Jackson may well have had specific reasons for including some of the songs on this one, but he has many far, far better songs in his catalog that some of those represented here. Still, it’s a welcome collection and there aren’t really any bad songs on the disc.

The solo acoustic versions of “Never Stop,” “The Night Inside Me” and “My Stunning Mystery Companion” actually renewed my interest in his latest album, The Naked Ride Home, which didn’t have that big of an impact on me when it was originally released in 2002. But hearing those three songs in this intimate setting opened them up to me and made me give the album another chance.