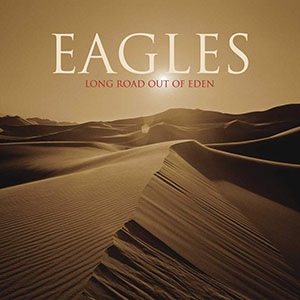 Long Road Out Of Eden

I could be wrong, but I think the first “double album” of the rock era (and maybe of all time) was Bob Dylan’s Blonde On Blonde, released in May 1966. Since then, for every great two album set there have been three or four that should have been single albums. For whatever reason (ego, marketing, greed, etc.), the past forty years have seen way too many albums stretched from one disc to two. Given the choice, I’d rather have one disc of great material than two discs that also include lots of second rate, filler material. Sadly, such is the case here. But back to Bob Dylan for just a minute. Consider the fact that Dylan recorded and released three albums (four discs) in eighteen months. And not just any three albums. Bringing It All Back Home was recorded in January 1965 and released in March; Highway 61 Revisited was recorded in June, July and August 1965 and released in August; Blonde On Blonde was recorded in January, February and March 1966 and released in May. Two of these three albums are often found in all time Top 10 lists and Brining It All Back Home is usually not too far behind. Four discs of unbelievable, groundbreaking material in less than 18 months! I think it’s safe to say the world hasn’t seen a burst of musical creativity like that since. These days most major artists wait two to four years to put out one new album.

OK, back to the Eagles. I bought the first album when nobody knew who they were, long before they were stars. I fell in love with the album and band immediately. Their follow up album, Desperado, while not ranked as high by most fans, is one of my favorites. Every album was an event for me. I was very sad to see Bernie Leadon go and I was never a Joe Walsh fan, but Hotel California worked on every level. And it still does 30 years later. Don Henley’s first solo album Building The Perfect Beast is a masterpiece, one of my all time favorite albums. But, I never really “missed” the Eagles. They’d made a handful of great albums, I listened to all of them regularly, I was a fan of Henley’s solo work (Glenn Frey solo never did it for me). The reunion tours didn’t mean anything to me. I preferred to listen to the original albums.

So, 28 years after their last “real” album (The Long Run) comes this double CD “reunion/comeback.” Available only at Wal-Mart. Well, OK, I’ll make a trip to Wal-Mart to get it if I have to. Who knows how and why this album came to be. There are many who see it as simply a chance to make a lot of money. But, I’m willing to give them the benefit of the doubt and assume it came to be because they wanted to write songs and play music together again. Maybe I’m naive. Regardless, it’s here. The results are mixed. Very mixed. Sure the CD has supposedly sold over 2 million copies, but I guarantee you it’s not based on the music, but on pure nostalgia. Hell, their Greatest Hits album is supposedly the best selling album of all time, selling something like 41 million copies worldwide. So, there’s quite a fan base out there. A lot of people who want to relive those “glory days” of the late 70s. I’d be willing to bet that not a lot of the people who bought this CD are listening to it over and over again.

Now, don’t get me wrong, there are some good songs on this CD, but I’d be hard pressed to include more than two or three in an iTunes playlist of my favorite Eagles songs. There’s nothing on this CD that can touch their classic material from the old days. “How Long” probably comes the closest (and it was written over 35 years ago by J.D. Souther!). This CD is a perfect example of a two disc set that should have been only one disc. Whittle this thing down to one disc and you’ve got a fine album (though it would still come in last in a list of my favorite Eagles albums). But the way it is now, there’s just way too much filler here, songs that just don’t make the cut. Songs that seem like they were probably included just so Joe Walsh could have a few songwriting credits. And the outside material covered here (most notably “I Love To Watch A Woman Dance”) is almost completely forgettable. I plan to give this CD a few more good listens and then burn a CDR of the best tracks, the ones that should have comprised the album in the first place.