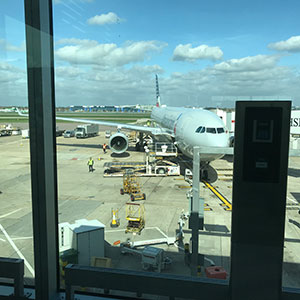 So we arrived late at the London airport. Of course. I had an hour and 10 minute layover here in London before my flight to Nice, which is not a lot of time at all when you’re coming in on an international flight. By the time I was able to get off the plane, travel through the various terminals, go through security yet again and make it to the gate my plane was gone.

The ticket agent said something about trying to get me on an upcoming flight (seeming to blame me for showing up late). I explained that my flight (on their airline) had been late, it wasn’t my fault. I was put on the next flight, which luckily was only about an hour and a half later. Of course, that flight got delayed as well. I spoke to the ticket agent about my bike and luggage. She was able to look them up via the computer and told me they probably wouldn’t be getting to Nice until the next day (Saturday). Had breakfast at a great little place called Giraffe. Wandered around the terminal a bit, looking for a Wi-Fi connection, but couldn’t find one. Finally got in the air and was off to Nice.