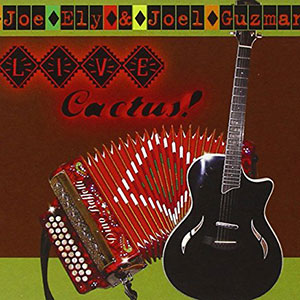 I’ve probably seen Joe Ely live more than any other performer. Joe’s a Texas boy, of course, part of the “Lubbock Mafia” which also includes Butch Hancock (one of my all-time favorite songwriters), Jimmie Dale Gillmore and Terry Allen. I lived in Austin for over 20 years and Joe plays Texas constantly so I had quite a few opportunities to see him. I saw him tape shows for Austin City Limits. I saw him with a full band at places like Gruene Hall one of the last true Texas dance halls. I saw him play acoustic solo shows here and there. I saw him when Bobby Keys was playing sax in the band (unbelievable). And then there’s the Cactus Cafe where this was recorded. Come to think of it I’ve probably seen more shows at The Cactus than any other venue. I used to go there constantly in the 80s and early 90s. A great little listening room on the University Of Texas campus. I saw so many people there: John Stewart, Steve Forbert, Robert Earl Keen, Steve Young, Elliott Murphy, Green On Red and countless local Austin bands and songwriters, just to name a few. The University FM radio station, KUT-FM, used to broadcast a weekly live show from the Cactus that I would religiously tape on cassette. One of these days I’ve got to transfer some of those show over to CD. So, this new release of Joe Ely live at The Cactus Cafe brings back a lot of memories on a lot of fronts.

Joe Ely is quite simply one of the very best performers I’ve ever seen. Plain and simple. The man is pure energy. It doesn’t matter if he’s by himself with an acoustic guitar or with a full band, he plays his heart out. There’s nothing better than a Joe Ely show. Put him in a Texas bar setting and he’ll have the roof rocking off the place. Put him in a listening room and he’ll have everyone there in the palm of his hand. I got in on Joe Ely from the very beginning. I was working at Disc Records in Austin when his first album came out and was just blown away. Joe wrote 5 of the songs on that album, Butch Hancock wrote 4 and Jimmie Dale Gilmore wrote the remaining one. In 1977 to a kid who had just moved to Texas one year earlier it was a full blown introduction to three great Texas songwriters. Every album after that got my full attention. His 1980 live album, Live Shots, recorded in England when he was on tour with The Clash, is a small masterpiece. He’s been making great albums for over thirty years, including his work with The Flatlanders, and this one is no exception.

Live Cactus! doesn’t say when it was recorded but I’m going to assume it was fairly recently. It’s an outstanding collection of 13 songs, recorded with just Joe on acoustic guitar and Joel Guzman on accordion. This is Joe’s 4th official live album (Live Shots (1980), Live At Liberty Lunch (1990) and Live At Antone’s (2000)), but it’s the first acoustic one. (Though there is an interesting, six song, import only 1998 release titled Live At The Cambridge Folk Festival that is also acoustic.) The songs pretty much run the range of Joe’s career from “Because Of The Wind” from his second album, 1978’s Honky Tonk Masquerade, through “All That You Need” from his last real studio album, 2003’s Streets Of Sin (a great album, though overlooked by many). Anytime you have an artist with a large catalog everyone is going to have their own idea of what songs would constitute the best representation for a live album, and I’m probably more opinionated than most. Some of these songs are not my favorites and I would have come up with a pretty different set list if it had been left up to me. Joe does a fantastic version of Terry Allen’s “Gimme A Ride To Heaven Boy” that I would love to have an official live version of. But, all in all, it’s a very welcome addition to my Joe Ely catalog.

Joe’s gone the indie route now. This is the third CD in just over a year on his own Rack ‘Em Records, the first being Happy Songs From Rattlesnake Gultch and the second being a collection of very early songs he recently recorded for the first time, Silver City. All three of these releases are well worth seeking out. Let’s hope Joe continues to release both old and new material as good as these three.