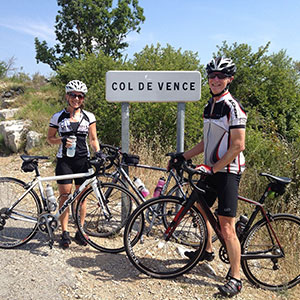 Well, my main cycling buddy, Les just emailed and said he is going to have to bow out of the France cycling trip because of really bad back pain that has developed in the last few days. We leave in just a few hours! I knew Les had been having some back problems over the last few days, but I really thought it would get better enough for him to go. What a drag. This is the fifth trip Les and I would have made to France for cycling and I can’t believe he has to cancel at the very last minute. It would kill me to have to do that. So, it looks like it’s just going to be Connie and I this year. There was some talk (not by me) of canceling the entire trip since Les couldn’t go. Hey, I’m going one way or another, even if Connie ends up canceling as well. The apartment in Nice is already paid for!

I’m hoping Les might feel better in the next few days and decide to join us after all, we’ll just have to wait and see. It’s an almost three week trip, so if he gets better quickly he could still fly over and have a great time.

I’m all packed and will be leaving for the airport in just a few hours. It won’t be the same without Les, but I’m still looking forward to a great trip. Next stop Charlotte, North Carolina, then on to Paris and Nice.