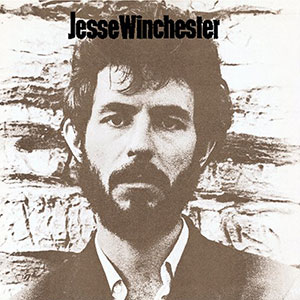 I’ve bought an album by a new artist (or just new to me) for lots of different reasons: I was familiar with and admired the producer of the album; I had heard a song the artist did covered by another artist; musicians I was familiar with played on the album; I heard a song on the radio or saw a performance on TV or live; someone I knew and trusted wrote the liner notes; a friend told me about it; etc. But I think this may be the only album that I ever purchased strictly because of the cover. Jesse Winchester‘s self titled debut album was released in 1970 on the Ampex Records label. The label only lasted two or three years though they did release about forty or fifty albums, including Great Speckled Bird, Runt and The Ballad Of Todd Rundgren by Todd Rundgren, For Sale by Fever Tree and a whole lot of other stuff even I have never heard of. Winchester’s album was the fourth disc from the label. I ran across it in 1972 in a cut-out bin somewhere in Santa Monica. I can’t remember for sure, but I probably paid about 99¢ in those days. Now, it’s possible that the fact that Robbie Robertson (from The Band) produced the disc might have also influenced by decision to buy it, but really, it was the cover: a grainy, washed out, dark brown sepia close-up photograph of a very down and out, scruffy, despondent looking character who looked like he just stepped out of the Civil War. It was very intriguing. And what I liked even more was that the back cover was the exact same image! (Imagine my surprise when I bought it, took it home and opened it up only to find it was a “gatefold” cover and the exact same image was also used on both of the inside panels.) Now I’m sure this cover would not have the same effect on a lot of people, and there’s really not much to it, but something about it just drew me in and made me want to find out what this guy sounded like.

Jesse Winchester is one of my all-time favorite singer-songwriters. There’s no one else like him. He’s written so many great songs I wouldn’t know where to begin listing them. Well, actually, that’s not true. I can begin right here on his debut album which contains my very favorite song of his ever, “Yankee Lady.” There are ten other songs on the album, all written by Winchester, of which at least one is a true classic (“The Brand New Tennessee Waltz”). Several of his other albums, notably Third Down, 110 To Go and Let The Rough Side Drag are among my all-time favorite releases. He’s only made three albums in the last thirty years but his seventies output is second to no one.

The album is a decidedly “low tech” affair, whether on purpose or not, I don’t know. The sound is very rough, but in a way that suits the songs perfectly. Things kick off with the raucous “Payday”, Winchester’s ode to money in the pocket on a Friday night. His voice is bathed in echo, the drums are hard and fast and the lead guitar (I think it must be Robertson) is recorded just a little too “hot,” peaking out and distorting a tiny bit throughout the track. The distorted guitar returns on “Quiet About It” and the piano on “Skip Rope Song” is the same, a little “fuzzy” around the edges. This is by no means a “state of the art” sonic experience. It’s a rough and tumble, gritty and uncompromising, a perfect counterbalance to Winchester’s wonderfully smooth, gentle and yet, very raw and powerful vocals. Winchester would go on to make much “smoother” albums later in his career (Nothing But A Breeze and A Touch On The Rainy Side are almost exact opposites in sound respects from this album). But the sound of this album gives it a character and personality that is unique among his releases.

On song after song Winchester constructs near perfect vignettes of people and places. “Biloxi” (featuring a stately piano, a slowly picked acoustic guitar and shimmering cymbals) is another one of Winchester’s better known songs, the kind of plaintive, descriptive ballad he would later perfect on a song like “Mississippi You’re On My Mind.” There’s a touch of humor in “Snow,” a song he co-wrote with Robertson. Winchester is a southern boy from Memphis, Tennessee who moved to Montreal, Canada in 1967 because he refused to serve in the military. “I was tuning in the six o’clock newscast, And the weather man mentioned snow / As soon as I heard that four-letter word, I was making my plans to go.” The love songs, “That’s The Touch I Like” and “Skip Rope Song” are also highlights, but “Yankee Lady” and “The Brand New Tennessee Waltz” are the true standouts here. “The Brand New Tennesse Waltz” has been covered by people like Joan Baez, Sweethearts Of The Rodeo and The Everly Brothers while “Yankee Lady” has been recorded by Tim Hardin, Brewer & Shipley and others. But no one else even comes close to Winchester’s originals. Those two songs alone make this album worth having. Winchester has a dark side as well. “Rosy Shy” and especially the moody, almost spooky, “Black Dog” show a distinctly different side of things. The album ends the same way it began with “The Nudge,” a rowdy tip of the hat to loose women.

Jesse Winchester was out of print for a long time until the great Canadian label Stony Plain released it on CD in 1994 (along with the rest of his incredible catalog). It’s now also available through the Wounded Bird reissue label. Wounded Bird also released on CD for the first time a wonderful live album, Live At The Bijou Cafe, a promotional only radio station release from 1976 (though to be honest, Wounded Bird is notorious for poor quality sounding reissues and this is just one example). Jesse hasn’t made a new album in almost ten years, since his 1999 Sugar Hill release Gentleman Of Leisure. He still tours a bit, playing festivals, performing arts theaters and clubs. I’d sure like to see a new album one of these days. Until then though I’m quite happy with the ones he’s already given us.