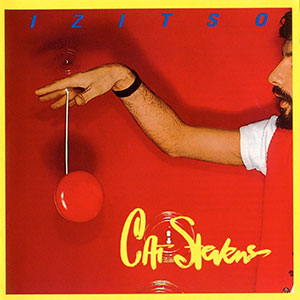 Cat Stevens was one of the first “singer-songwriters” I fell in love with. Tea For The Tillerman was an important album for me. I listened to it a lot when it was first released. I saw Stevens at the Greek Theatre in November 1971. I remember Tom Jans and Mimi Farina opened the show. (Tom Jans is one of the great unheard singer-songwriters of the 70s. I’ll blog one of these days about his Eyes Of An Only Child, one of my favorite albums.) Teaser And The Firecat followed, and while not quite as good as Tea For The Tillerman, it too was a great album. I saw the movie Harold And Maude around this time which featured a lot of music from Mona Bone Jakon and so went “backwards” and picked up that album which has some great songs on it.  Just recently I finally picked up import copies of his first two albums on CD (expanded with lots of bonus tracks), Matthew & Son and New Masters. I decided to put together a comprehensive iTunes playlist of all his music. So I began listening to each album one after another. I had most of them, including the box set, on CD, but I was missing the last three CDs (from his “Cat Stevens” career), Numbers, Izitso and Back To Earth. I found them all at Amazon pretty cheap. For some reason Izitso must be out of print in the US now, as it took them a long time to ship me a copy and when it finally came it was a UK printing.

Well, there was a reason I hadn’t gotten around to buying those three albums on CD (I have old vinyl copies). They’re just not that good. A far, far cry from his best work. It’s really just the material. His voice is still in fine shape, there’s nothing wrong with the production or sound. It’s just the songs. They aren’t that good. The only thing that will make it onto my iTunes playlist from this is “(Remember The Days Of The) Old Schoolyard,” and that just barely. Well, I might also include “(I Never Wanted) To Be A Star” which has a certain charm to it though his “gimmicky” use of earlier song titles tends to annoy me. The rest of the songs are all adequate, but they aren’t songs that stick with me. They aren’t songs that I want to hear over and over again. They’re not “bad.” They’re just not memorable. The two instrumentals do next to nothing for me.

By the way, I was very pleasantly surprised with his newest album, released in 2006 under the name Yusuf, An Other Cup. It’s really pretty good and I’ve listened to it repeatedly. I recently picked up a DVD titled Yusuf’s Cafe Session but I haven’t had a chance to watch it yet. I know there are a few “Yusuf Islam” CDs out there and as much of a collector as I am and as much of a fan of Cat Stevens as I am, I doubt I’ll ever get around to picking those up. There’s just too much other stuff, and as I keep realizing as I get older, not near enough time to listen to it all.