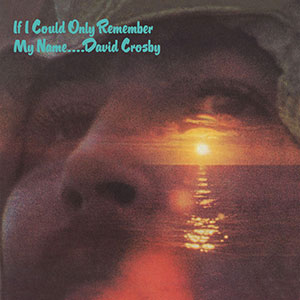 If I Could Only Remember My Name….

It took a long time for this album to reveal itself to me. More than 30 years. I’ve always been a very big CSNY fan. And a big fan of all the various incarnations and solo careers. The first concert I ever saw was Stephen Stills at the LA Forum. I think it was 1971. Neil Young is one of my all time favorite artists. In addition to Crosby, Stills & Nash, Deja Vu and 4 Way Street, Graham Nash’s first album, Songs For Beginners, had a huge impact on me. I love the first collaboration between Graham and David, Graham Nash & David Crosby (which for some unknown reason is still not available on CD in the US, though import copies are easy to find and reasonably priced). I bought If I Could Only Remember My Name…. when it was first released, but I never listened to it very much. It was a difficult album for me to find my way into. This is a different kind of music, especially for someone like me who is anchored in typical “pop” music and song structure. These are not typical pop songs. They’re not even typical “David Crosby” songs. Crosby has always had a very distinctive, unconventional songwriting style, even back in his days with the Byrds. The songs on If I Could Only Remember My Name… really took everything to a new dimension for him. “Laughing” was probably the only song I could really remember after I’d played the album. Everything else just kind of blended together into one long piece of music.

I probably didn’t listen to this album for 25 years or so. Occasionally I’d read a review or article which referenced it as one of the great albums from the 70s. I never saw it that way. Finally, I started giving it another chance, throwing it on occasionally. Gradually (and slowly) it began to open up to me. Or I began to open up to it. A remastered, expanded version was released in 2006 which contains both a CD version and advanced resolution stereo and surround sound versions on DVD. I picked this up and began listening even to it even more. Now it’s one of my favorite albums to listen to.

It’s funny how that works. There are some albums that hit me the first time I listen to them and become all time favorites. Darkness On The Edge Of Town was like that. Blood On The Tracks is my very favorite album of all time, and though I loved it from the beginning, it took several years before it really found its way to that place. Sometimes it really takes time and repeated listening for me to find my way into certain albums and pieces of music. Which is why reviews that appear as soon as an album is released always need to be taken with a grain of salt. Other times no amount of repeated listenings will bring an album into my favor. There are certain albums I’ve tried and tried to find the magic in that some others see so clearly and I just can’t. And sometimes it just takes 30 years.

Tags: CSN, CSNY, David Crosby, If I Could Only Remember My Name...