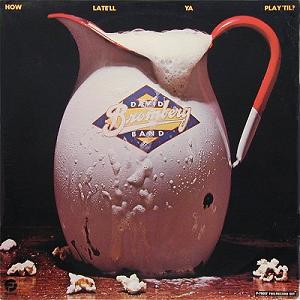 How Late’ll Ya Play ‘Til

There’s a great version of Jerry Jeff Walker’s classic song, “Mr. Bojangles,” on his 1969 Atco album, Five Years Gone. I didn’t discover Walker until a few years later when he released his self-titled album on Decca (still my favorite album of his and still unavailable on CD). It’s referred to in the liner notes as “the famous drunken recording made early in the morning on WBAI with David Bromberg.” It’s just Walker and Bromberg playing acoustic guitars live at a radio station. It was recorded in November 1967, during a period when Bromberg would regularly back up Walker. David Bromberg is what you might call the textbook example of a “musician’s musician.” He’s played with a ton of people over the years. There’s a great tape circulating of Emmylou Harris playing live on a radio broadcast in 1969 (this was six years before her “debut” album Pieces Of The Sky) with Bromberg backing her. He’s played on sessions with everyone from Bob Dylan to John Prine to Willie Nelson to The Eagles playing everything from fiddle to guitar to mandolin to dobro to bass.

But David Bromberg is so much more than just a backup musician. Over the years he’s recorded over a dozen of his own albums. Originally signed to Columbia, his first, self-titled album is a minor masterpiece. An eclectic artist he is equally adept at blues, country, folk, pop, rock, even jug band music and jazz. An Appalachian fiddle tune might sit right next to the Sam Cooke song “(What A) Wonderful World” on one of his albums. Additionally, Bromberg is an excellent songwriter, and has penned many of the songs on his own albums, including “The Holdup” which he wrote with George Harrison.  After four albums with Columbia he moved to Fantasy who released How Late’ll Ya Play ‘Til in 1976. The original version was a double album LP with the first disc consisting of new studio recordings and the second of live recordings. Now, Bromberg made some terrific studio albums, but where he really excels is live on stage. He has a sense of humor that infuses his performances, and sometimes his songs, that is second to no one. I dare say there are many people who have bought this album after simply hearing his extended rant on “Will Not Be Your Fool.” When Bromberg gets going he is something to see (and hear).

If the studio disc of this set had been issued by itself it would stand as one of Bromberg’s best. Bromberg updates his classic “Danger Man” as “Danger Man II” and his “Kaatskill Serenade” is one of the best songs he’s ever written. He does beautiful versions of Ian Tyson’s “Summer Wages” and Mary McCaslin’s “Young Westley.” The blues are well represented with “Dyin’ Crapshooter’s Blues” and Leiber & Stoller’s “Idol With A Golden Head” fits in surprisingly well. There are guitar and fiddle workouts and even a cowboy song.

But it’s the live disc that’s the real draw here. For being such a dynamic performer Bromberg has released precious few live albums. In fact, other than this, I think the only other official release is an “official bootleg” type project of a New York City show from 1982 released on his own label in 2003. I have several outstanding bootlegs and I’d love to see Bromberg raid the vaults and put out some more classic stuff from the seventies and eighties. Recorded at the Great American Music Hall in San Francisco in 1976, there were only six tracks on the original “live” disc, but one of them clocked in at over sixteen minutes and another at eight. Each one is a real treat, but “Will Not Be Your Fool” and “Bullfrog Blues” are the highlights. Bromberg’s got a full band here, including two horn players and he utilizes them to full effect, though he does take two songs on his own with just an acoustic guitar. “Bullfrog Blues” is one of those, and it features Bromberg on acoustic bottleneck guitar as he weaves a hilarious account of a girlfriend gone wrong. Though it’s over sixteen minutes long it doesn’t even seem half that long due to Bromberg’s captivating performance. The liner notes say he’d been performing it for over eight years and had never done it the same way twice. The bulk of the song is taken up by his rollicking ad-lib. He’s a master of this type of thing. “Come On In My Kitchen” and “Sweet Home Chicago” are acoustic and electric blues workouts (respectively), the kind of thing Bromberg could do standing on his head, yet he imbues each one with a passion and exuberance that make them truly special. This band is at the top of their game.

But like I said, the centerpiece of the entire set is Bromberg’s original composition “Will Not Be Your Fool,” in which he proceeds to admonish his lover: “I’ll be your lover or your friend, darling, but I will not be your fool.” When he carries on with an extended tirade about just how long it will be before he would ever be her fool it’s priceless. The band vamps behind him, the crowd is in the palm of his hand and it’s pure bliss. This is the kind of performance very few artists could ever pull off. It’s what makes Bromberg so distinctive, so original and so unique. The vinyl album closes out with a stellar version of Dr. John’s “What A Night.”

There are a couple of things that bother me about the CD reissue of this album. First of all the label (Fantasy) has decided to break it into two separate CDs and sell both at full price. That’s just ridiculous. This was conceived and originally issued as a double album and it should be sold on CD as such. And at a more reasonable price. Paying almost $30 for both of these CDs is just too much, and very indicative of everything that’s wrong with the music business these days. Additionally, they switched the order of the CDs and branded the live album as “Vol. 1: Live” and the studio album as “Vol. 2: Studio.” My guess is because the live album sells better. On the plus side however, they have added 3 bonus tracks to the studio disc and two to the live disc. The live tracks (“Loaded And Laid” and “Make Me A Pallet”) are especially welcome.

Bromberg took an extended leave of absence from recording and playing live to go to school and learn to make violins. He now owns and operates a violin store in Wilmington, Delaware. He plays a few shows now and then and released his first album in many years in 2007. It’s good to have him back. Now how about searching through those old tapes and finding some classic shows from years gone by to release?

Tags: Bromberg, David Bromberg, How Late'll Ya Play 'Til