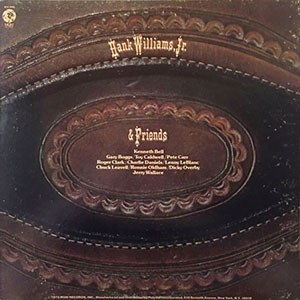 I think I first got into Hank Williams, Jr. through his 1980 album Habits Old And New. Somehow I picked up a copy somewhere (probably got it free as a promo since I was working in a record store around that time and it’s not something I would have bought at the time). I listened to it at some point and was pleasantly surprised. I’d only heard Hank Williams, Jr. through the odd country hit here and there that I might have come across while listening to a country radio station (which wasn’t very often) and I’d never been too impressed. But songs like “Old Habits,” “Dinosaur,” “All In Alabama” and “If You Don’t Like Hank Williams” were right up my alley. I played the album quite a bit back in those days. But that was as far as I went when it came to Hank Williams, Jr. I never picked up any more of his albums or listened to the couple of others that I had in my collection. I guess it should be noted I have a LOT of albums and CDs that I have never listened to. I try to make my way around to everything eventually, but I realized a long time ago I was never going to be able to listen to them all and the older I get the more particular I get about what I’m listening to.

A few months ago I was in Best Buy, just browsing through the racks, and I came across a copy of his CD Whiskey Bent And Hell Bound (1979) for $5.99. Hell, I’ll try almost anything for $5.99, so I picked it up. A great, rocking country album with quite a few gems on it. I noticed on the packaging it was part of a series, “Original Classic Hits – Volume 4” it said. It looked like the label was repackaging a bunch of albums as part of a series. So, I checked on Amazon.com and sure enough, all these CDs were priced at $5.99. So I picked up a few more including The New South (1977) and this one, Hank Williams, Jr. & Friends (1976). So, now I’m listening to a bunch of 30 year old Hank Williams, Jr. albums on a regular basis. Of the four I mention here, Hank Williams, Jr. & Friends is probably my least favorite. It’s an enjoyable album, but I just like the others better. I don’t think the songs are as strong on this one. However, I think I’m in the minority here, as it seems that this is generally regarded as one of his all time best albums, based on reviews at Amazon.com and allmusic.com. Maybe it will grow on me more with time.

As I understand it, this album was Hank’s break with the past, the first time he really struck out on his own, going his own way, singing his own songs (with a couple of covers as well) playing with the musicians he wanted to play with. The “& Friends” include Charlie Daniels, Toy Caldwell (from The Mashall Tucker Band) and Chuck Leavell (from The Allman Brothers Band). He covers two of Caldwell’s better known songs, “Losin’ You” and “Can’t You See” that really don’t work very well for me. He doesn’t bring anything new to the songs and I’m left just wanting to hear the originals. However, “Stoned At The Jukebox” and “(The) Living Proof” are classics which I’d gladly add to an iTunes playlist.

It’s hard to complain when the price is $5.99 but it should be pointed out that the sound on this disc is pretty poor. Everything is very flat and dull. It certainly hasn’t been remastered. And the artwork. Sheesh. The original LP artwork was pretty poor, but it’s a lot better than what they came up with for the CD reissue. And, of course, it’s just a 2 sided insert. Some basic credits and that’s it. But, again, at $5.99 I can’t complain too much. Though I’d probably shell out $9.99 for a nice reissue with great sound, a booklet with an essay and photos, etc. Doubt that will ever be happen, but who knows.