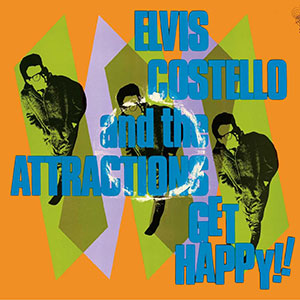 Give him credit, Elvis Costello has managed to get three different labels to rerelease his catalog in the last 15 years. But frankly, most of us fans and collectors are throwing up our arms in frustration. And that’s hard to do! Usually it’s the collectors who are complaining about not enough reissues. Take Get Happy!! as an example. The LP was originally released in 1980. The first CD was released around 1990 I think. Then in 1994 Ryko released what we thought was the “definitive” version. An expanded, remastered edition with 10 bonus tracks and liner notes by Elvis himself. Great! This is what we all want. But then in 2003 Elvis shifted his catalog to the Warner Music Group and Rhino issued another “expanded” version. This time the original album on the first CD and a bonus disc with 30 (count em, 30!) bonus tracks, a 28 page booklet with extended liner notes by Elvis, credits, photos and lyrics. OK, forget I already shelled out money for the Ryko version 10 years earlier, this is pretty cool, I can go for this. But then, a mere four years later (in 2007) Elvis again shifts his catalog, this time to Universal and Hip-O records and yet another version comes out. This one is just the original album itself. No bonus tracks. And of course, the earlier versions with bonus tracks are now out of print. Enough already. Or should we expect another version in 2012? Even the most diehard fan is getting tired of buying the same album over and over again.

My Aim Is True was recently reissued in this latest go around as well. I’ve got the original UK vinyl, I’ve got the original US vinyl, I’ve got a Belgium vinyl pressing on colored vinyl, I’ve got the original CD, I’ve got the Ryko CD with 9 bonus tracks, I’ve got the Rhino CD with 13 bonus tracks (the same 9 from the Ryko disc plus 4 new ones). So I bought the Rhino version for 4 new songs and some new liner notes. OK I can live with that seeing as how much I love this album, but I wasn’t especially happy. Then comes the Universal/Hip-O version with 12 new outtakes and a second disc of live material recorded in 1977. Now let me be clear here. I’m all for releasing this archival “bonus” material. I’m the biggest champion there could ever be for that. I think the artists and the labels should be releasing LOTS more of this kind of archival material. Demos, live recordings, alternate tracks, outtakes. Keep it coming.  Just don’t keep tacking it onto a catalog CD that’s already been released 3 times! Don’t make me buy My Aim Is True yet again just to get this new stuff. One “expanded” reissue is enough. Please, put the bonus material out on it’s own or as part of a “bootleg series” box set (think Bob Dylan). This is ridiculous.

I have tried so hard to like this album. Really, I have. My Aim Is True was one of those albums that changed my life. It’s in my top 25 of all time. The follow up, This Year’s Model, is in some ways an even better album, but it can’t quite touch the emotional place in me that My Aim Is True occupies, though it’s not far behind. I also love Armed Forces. But when Get Happy!! was released in 1980 I just didn’t get it. Imagine my disappointment. Three home runs (two of them grad slams) and then an album that just doesn’t do anything for me. I tried to like it when it first came out. I tried again when I revisited it with the Ryko reissue. And now I’m trying again with the Rhino reissue. But, it just doesn’t connect with me. I think it’s the songs. They just don’t do it for me. Nothing like the songs on the first three albums. Now, I know that this is considered Elvis’ best album by some people. Sorry, it ain’t happening for me. I guess if it hasn’t by now it probably never will. But I keep coming back to it because I hate to give up on it. There’s only one or maybe two songs on the original disc I would put in an iTunes Elvis playlist (“I Can’t Stand Up For Falling Down” and “I Stand Accused.” The 30 track bonus disc on this release has some good stuff, including two versions of “Girls Talk,” though it’s not a disc I’m going to play very often. At least there are many other Elvis albums I do enjoy.