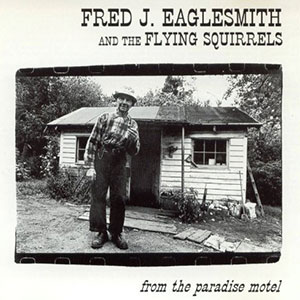 From The Paradise Motel

In the mid-eighties I came across a publication from the Elliott Murphy Information Society. A newsletter really that provided a lot of information about, well, Elliott Murphy. Now, I’d been a big fan for many, many years (his debut, Aquashow, is in my Top 10 of all time), so I was very happy to make this discovery. I subscribed to the newsletter and eagerly awaited each edition (I think they came out quarterly). This was probably 1985 or 1986, way before email or websites. I can’t remember how it happened exactly, but at some point t-shirts were offered for sale through the newsletter. They were $15.00 each I think. At the time, I thought that was an extraordinarily high price of a t-shirt (again, this was way before the artist merch business got so out of hand) and I sent a postcard or something off to the editor of the newsletter saying so. One day not long after that the phone rang. It was Charlie Hunter, the guy behind the EMIS. I was quite surprised that he was calling me, but he’d phoned just to say hi, and tell me that he had gotten my postcard and to explain why he didn’t think $15.00 was too much for a t-shirt. Well, I never did buy a t-shirt but Charlie and I became friends and corresponded here and there. When I started my label Dejadisc in 1992 Charlie was a huge help, offering lots of advice. Actually, I think I drove him crazy calling him up at all hours of the day and night with questions about the music business. He helped me license my first release, Elliott’s album Party Girls And Broken Poets, which at the time, was his only album that had never been reissued on CD. Charlie did the artwork for the CD release and he also did the artwork for my second release, and album from Texas singer-songwriter David Rodriguez. He did both of these on a “spec” agreement that if they sold a certain amount I’d pay him a certain amount. Well, neither ever sold much and so Charlie never made any money for doing those packages. Apart from his work with Elliott Murphy and the help he so graciously gave me when I was starting my label, I’ll always be thankful to Charlie for introducing me to the music of Fred Eaglesmith. I was at a Folk Alliance conference in Washington D.C. one year when Charlie told me about this new guy he was managing. I had a lot of confidence in Charlie, so I figured if he was managing this guy he must be something special. A month or two later at SXSW I got my first chance to see Eaglesmith and I was blown away. I went to see him three times over the course of a few days and I was totally hooked. I can’t remember when I lost track of Charlie. I still hear about him now and then, but I haven’t spoken to him in at least ten years. He’s a great guy, a real music lover, one of the good ones. He used to say, “The only causes worth fighting for are the lost ones.” (A quote from my favorite movie of all time, Mr. Smith Goes To Washington; that alone made me like him immensely.) I hope he’s doing well out there.

Live From The Paradise Motel is, as the name implies, a live album, recorded in one night at the La Casa Music Series in Birmingham, Michigan. It’s a sparse, acoustic recording with just Eaglesmith, a bass player and a mandolin player. Both the sidemen, who also contribute vocals and the harmonies throughout, are outstanding. With sixteen tracks, all written by Eaglesmith, it’s a superb showcase for his intensely powerful songs. Fred opens the show (and album) with a short accapella number, “Yellow Barley Straw,” which segues perfectly into “Thirty Years Of Farming.” It’s clear from the beginning this is man who writes what he knows. Tractors, small towns, general stores, ploughs, foreclosures and hard times fill the songs with a sense of the great American mid-west, though in fact, Eaglesmith is from Canada. Eaglesmith is a terrific story-teller, but what really sets his songs apart from many others are the characters who populate them. From the farmer who sees his farm auctioned off in “Thirty Years Of Farming” to the two bit criminal wannabes of “Little Buffalo” to the forlorn lovers of “Rodeo Rose” these are real people, the kind of people you can find in just about any small town from Ohio to Montana to Winnipeg.

This is a deeply intimate album, but not in the Joni Mitchell/Jackson Browne sense of confessional songwriting. Eagelesmith is a master storyteller and there’s never been more evidence of his skills than the tracks on this album. Almost every song is the equivalent of a finely crafted short story. Eaglesmith has a remarkable ability to bring characters, situations and places to life in a sparing, economical way that requires very few words. When I was a freshman in high school I had a very influential teacher for a creative writing class. I’ve always remembered his advice to “show, don’t tell.” Eaglesmith doesn’t so much “tell” a story; it’s more as if he shows it all to you. It’s almost as if you’re in a dark theater somewhere watching an old movie from the 1940’s. The characters are very, very much alive in the music.

Mixed in with the songs of farming, sharecropping and rural life (“Sweaburg General Store,” Sharecroppin’,” “Go Out And Plough”)  are songs of lost love, travel, missed opportunities (“The Highway Callin’,”My Last Six Dollars,” “Rough Edges”) and a lot of stuff that has just plain gone wrong. Eaglesmith is not, to say the least, an optimist painting confident, cheerful, positive pictures of life and love. Over the years Eaglesmith has written and recorded a fair amount of love songs, but you’d be hard pressed to find even one that represents a joyful, healthy or in any way positive portrayal of the romantic liaison between a man and a woman. Most are full of regret, despair, disillusionment, despair and heartache. Many involve jail. Most (if not all) end badly. Almost every relationship has either buckled under the weight of hard times and disparate personalities or is on the verge of collapsing from the abandoned dreams, postponed promises and/or disintegrating hopes that seem to haunt the players that wander from one song to the next. “I’m Just Deamin'” is a perfect example of a Fred Eaglesmith love song, depicting a love that was doomed from the start. “Should of never had a girl who didn’t know hay from straw,” he sings and everything you need to know about the relationship is entwined in those simple words. “Summerlea” might be the closest thing he’s ever written to real love song though it’s by no means anywhere close to the traditional type of song you’d usually associate with that genre.

“Sunflowers” showcases Eaglesmith’s amazing ability to set a scene, recounting the funeral of a neighboring farmer with stunningly straightforward understatement and an amazing sense of detail. It always gives me shivers. “Harold Wilson,” which closes out the album is another portrait of another farmer, this one still alive, but living in a motel for $100 per month after losing his land and his family. In reality there isn’t much that separates him from the dead farmer in “Sunflowers,” except that he’s still breathing.

“Little Buffalo” just might be my favorite song on the album. It’s a comical tale of “restless nights and endless fights” with an infectious sing-along chorus. Dancing around the account of barricades, flying bullets, barking dogs and waling sirens, and on full display, is Eaglesmith’s caustic wit and humor, something else he’s well known for.

Fred Eaglesmith has written many, many great songs. But, he’s never really made a great album. Don’t get me wrong, he’s made some pretty damn good ones, including Drive-In Movie and Lipstick, Lies & Gasoline and this one. Still he’s never made that album where everything came together in one perfect classic performance. They’re all flawed in one way or another, sometimes a little, sometimes a lot. The production is bad (or just plain weird), the songs are not quite up to par, etc. This album is as close to a true masterpiece as he’s come in my opinion. There are some songs on other albums that are better than the best songs on this album, but no other album is a strong throughout as this one.