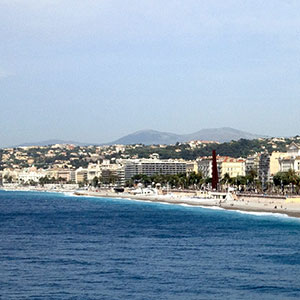 I’ve been cycling in the Nice area for over ten years now, coming over almost once a year. One of my favorite rides is a short little outing from Nice up to the small towns of Eze and La Turbie. It’s not long, it’s not hard and the scenery is spectacular. It makes for a great way to get started on a cycling vacation. It’s become my traditional “first ride” whenever I’m in the Nice area. Now that I’m staying in Vence (about twelve miles northwest of Nice) it still makes for a great first ride, just a bit longer. So, in keeping with tradition, I set out this morning for my first ride of the trip: Vence > Cagnes-sur-Mer > Nice > Eze > La Turbie and back.

I left Vence around 9:00AM. The sun was up, it was a beautiful morning, though a bit windy with some high clouds. It’s all downhill from Vence to Cagnes-sur-Mer, about six miles. Once you reach the coast there is a great bike lane that runs all the way from Cagnes-sur-Mer to the east end of Nice. It runs right along the beach so you have a great view of the sea. I followed the bike trail past the Nice airport and on to the wonderful Promenade des Anglais, the beautiful, wide boulevard that runs the length of Nice along the coastline. Next to the actual road is a very wide “promenade” full of joggers, cyclists, walkers, skaters and much more. The wind was very strong along the beach, I’m guessing maybe 20 miles an hour and I was heading almost straight into it, but it was no big deal. The wonderful “perched village” of Eze

I rode leisurely along the promenade, enjoying being back in Nice, thinking of all the times I’d been there before and how it was always so great to come back, until I reached the Nice port where the road takes you up and inland for a short period. There’s a terrific little climb as you exit Nice and head towards Villefrance-sur-Mer that is always a wake up call for what’s ahead. It’s a short ride into Villefrance-sur-Mer (another wonderful little town, the almost picture perfect example of a “Riviera” port) and then you make a left turn and head directly up the mountains to reach the road to Eze. It’s a series of switchbacks through what has to be some very, very expensive real estate (lots of beautiful “villas”). It’s steep, quite steep in a few places, but not too long and once you arrive at the top you are on the “moyene corniche.”

From Nice to the Italian border the mountains come almost right down to the water. This is one of my very favorite places on earth, I just love the combination of mountains and ocean. There are three main roads that run along the coast in this area: a low road that runs along the beach (basse corniche), a high road that runs up near the top of the mountains (grand cornice) and a middle road that runs between them (moyene cornice). The moyene corniche runs straight to the little town of Eze, a wonderful “perched village” that is maybe 1,000 years old. I’ve been here many, many times and taken all my friends up here when they are with me. From here it’s just a short two mile trip up to La Turbie, a town I first discovered when Carole and I stayed there for one night on our honeymoon (after getting lost). A view of the old Roman Monument ruins in La Turbie as you ride into town.

La Turbie sits just above Monte Carlo and the view from the edge of town is terrific. It’s also famous for the ruins of a 2,000 year old Roman monument. I stopped in La Turbie for a few minutes, ate a Cliff bar, refilled my water bottles and then headed back down to Nice, this time the “back” way, along the “grande moyene” which runs a few miles behind Eze through a wooded park area. The road that leads back down into Nice is the Col d’Eze which the cyclists ascend every year in the famous Paris-Nice bicycle race. It’s a long, steep and very fast descent straight into the northeast side of Nice.

Riding through the very busy streets of Nice can seem very dangerous and in some ways I suppose it is. But, on the other hand, drivers here are much more considerate and aware of cyclists, so in the end I think it balances out. You just have to be careful and very aware of everything around you. After a few blocks I was at the Place Masséna (a big grand open “square”) and then another nice ride along the promenade. This time I had the wind at my back and it was easy to keep a 20mph pace barely working at all.

Back past the airport, into Cagnes-sur-Mer and up the hill into Vence. Altogether about 53 miles and four hours of riding. A great first ride for this year in France.