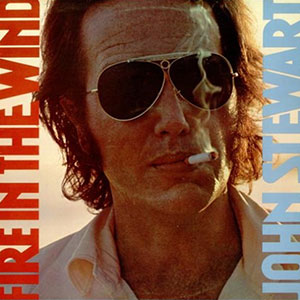 Fire In The Wind

I worked a four different record labels in the nineties. They were all independent labels. I never worked at a major label. Still, I think I have a pretty good idea of how the record business works and what’s involved. That’s why I just don’t understand the reluctance on the part of most major labels to make so much of their back catalog available digitally. Back in the “old” days when CDs ruled it made more sense. At each of the labels I worked at we would license material from major labels. Albums they just didn’t want to bother reissuing on CD. I used to talk to the folks that worked at these labels a lot. They would say their bottom line was 20,000 CDs. If they didn’t think a reissue could sell at least 20,000 copies they weren’t interested. It wasn’t worth their time and energy. Now, 20,000 is a LOT of CDs to sale, especially on a reissue. So, it was no wonder that a lot of albums languished in the vaults. Their reasons were pretty simple to understand. To make a reissue financially viable they had to pay for remastering, new artwork, pressing up CDs, distributing those CDs, warehousing the CDs, etc. Now an indie label could do the same thing much cheaper. We didn’t have to sell near that many CDs to break even or to make money. But that’s all changed now. To make an out of print album available as a digital only release, on iTunes, or wherever, the costs are dirt cheap. All you have to do is make a decent transfer of the master tape to digital files. Sure, you can remaster it if you want, but that’s not always necessary. For a few hundred dollars someone can transfer the tape and presto, you’ve got the digital files. No artwork costs. No distribution costs. No pressing costs. No warehousing costs. So, it boggles my mind why the labels don’t seem to be making more of an effort to make more albums available. I’ve said it before, and I’ll say it again, I could make a list of at least 100 albums in a flash that I would buy as digital downloads if only they were available. With all the trouble the labels are having making money these days it’s just incredible that they are not diving into their catalogs and making all this great music available. Each album might not sell 20,000 copies or anywhere near that, but really, how many would they have to sell to break even? I don’t understand it. They’re just letting money sit there on the shelves of their vaults.

John Stewart made a lot of albums during his lifetime. Sadly, he died earlier this year at the age of 68. He made several albums with The Cumberland Three in the late 50s. He made a dozen or so albums with The Kingston Trio between 1961 and 1967. He made even more albums as a solo artist from 1969 onward. And just about every damn one of them is in print, except Fire In The Wind! Which may be my all time favorite album of his. Figures. Now, granted, it might not be most people’s favorite John Stewart album. But, this is the kind of thing that gets me going about the major labels. Come on, how hard would it be to make this album available digitally? Stewart’s first solo album, California Bloodlines, is generally considered by many to be his best and it’s a great album, that’s for sure. But, I find myself playing this more often. California Bloodlines was released on Capitol Records in 1969. Stewart made one more album for Capitol, Willard, and then moved over to Warner Bros. where he made two albums before moving to RCA where he made three more (including the near perfect live album The Phoenix Concerts). It seems everyone believed in him, but when he couldn’t generate a hit they let him go and he moved on to someone else who thought they could help him find that elusive success. Well, he finally found it two albums later when he was recording for RSO Records. With the help of admires Lindsey Buckingham and Stevie Nicks he managed to take “Gold” from his Bombs Away Dream Babies album to the top of the charts. I saw Stewart live at the Cactus Cafe in Austin about ten years later and he joked that having one hit was like having sex just once in your life. Maybe best to have never had the experience at all if it was just going to be one time.

There are three things that make this album one of my favorite John Stewart releases: 1. the songs; 2. the production; and 3. the energy. Fire In The Wind was the album that came right before “Gold.” Stewart was still looking for that elusive hit. He had worked really hard to get signed with RSO (he even instigated a campaign with fans asking them to write to RSO and encourage the label to sign him). They eventually did and this was his first album with them. He had something to prove. And it shows. It’s an album full of great songs. It’s one of his albums were I can honestly say that every single song is a favorite. When I ripped this album from vinyl I started to pick my favorite songs for my iTunes “Favorite Songs” playlist. I finally ended up just putting the entire album in the playlist, which is very rare. There are rockers like “Fire In The Wind,” “On You Like The Wind,” “The Wild Side Of You” and . There are ballads like “The Last Hurrah,” “The Runner” and “Boston Lady.” Stewart knew he had to bring some great songs to this RSO debut and he made sure he did. The album was produced by Stewart and Mentor Williams and I think it may be my favorite sounding John Stewart album of all time. It’s hard to go too wrong with players like Troy Seals, Reggie Young, David Briggs, Mickey Raphael, Kenneth Buttrey and Herb Pederson. Still, Stewart and Williams bring a sound that is direct and clean yet still full of heart and soul with Stewart’s vocals right up front where they belong. Stewart had been making records for almost 20 years when this was originally released. To me one of the most amazing things about it is the energy. He’s focused and on point throughout the entire album. His vocals have never sounded better. I can feel the hunger, the desire to make this album his best yet.

I’ve seen this album referred to as a strong album that basically laid the musical foundation for Bombs Away Dream Babies and “Gold.” I disagree. This is the better album. John’s gone now, so there will be no more new albums. It’s time to put this treasure back in print. Someone. Anyone. Please.