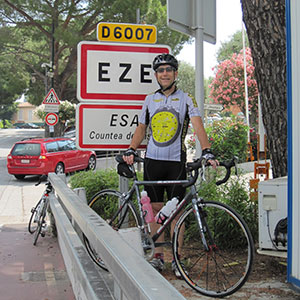 Our first day of cycling in France (on this trip). We’ve just put two full days of travel behind us (plane rides from Nashville to Charlotte, NC and then on to Paris and a long car drive from Paris to Nice) and we’re more than ready to get on the bikes. This is the fifth cycling trip I’ve made to France and I have a little tradition of heading up to Eze and then on to La Turbie as a kind of warm up day. It’s a great little ride, a bit of climbing and it’s not too far. Both Eze and La Turbie also hold some sentimental memories for me. Carole and I accidently stumbled upon La Turbie during our honeymoon in 1995. We were looking for Peille and Peillon, two wonderful little “perched villages,” got hopelessly lost and ended up spending the night in La Turbie. We discovered Eze a few years later. They are two of my favorite places in the Nice area and if you go to Nice you should definitely visit both.

We head out from our apartment to the Promenade des Anglais. In English it means “Walk of the English” and it’s a much celebrated promenade along the Mediterranean coast in Nice. It’s quite wide and has a bike path its entire length. There’s plenty of room for lots of walkers and bikers. We head east, towards Italy. As the Promenade ends the road makes a small little turn into the Nice port. We circle around that and headed up a nice little climb. The weather is perfect, in the mid-70s with lots of blue sky and sun, a few clouds here and there to offer an occasional bit of shade.

After working our way around the port we come to Villefrance-sur-Mer which is the first town on the road to Italy. It’s about 4 miles east of Nice. It’s a beautiful little “commune” (city or municipality) with a wonderful bay. Very scenic. Exactly what I think of when I picture the Côte d’Azur. Just after we circle around the town and are heading out along the coast road we come to the road that climbs up to Eze. Eze is one of the most famous of the southern French “perched villages,” probably in part because it’s so close to Nice. These are tiny little villages/towns that were built hundreds of years ago on the top of a very high cliff or mountain. The inaccessibility offered some much needed safety and defense to the early inhabitants. These little villages have fascinated me ever since I first saw Peillon many years ago and I’ve made a hobby out of trying to visit as many of them as I can via bike. 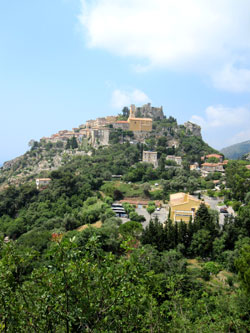 The Perched Village Of Eze

The climb up to Eze is not too long and not too steep, but it’s a good little climb nonetheless. After traversing a series of switchbacks we connect with the “Moyenne Corniche” (the middle road that runs along the mountain coast) and that takes us up to Eze. We cross a big bridge and there we are. The Paris-Nice cycling race almost always passes by Eze on the final stage of the race and it’s fun to watch it on TV and recognize this road and bridge we’re now cycling over ourselves. The road up to the entrance of the town itself is very steep, but fairly short. We make the quick climb and hop off the bikes. Eze proper is only accessible via foot. No cars, no bikes. It’s a series of twisted stone paths that wind in and out and around. It’s a little bit of a tourist destination these days with lots of little craft shops. Even so, it’s still a spectacular place. We carry our bikes up the little paths to the top where the ancient ruins of the original city are. It costs €5.00 to get into this part, which is also a big garden, but Connie says, “What the hell, I may never be here again,” so we pay the money and wander around for a little while. 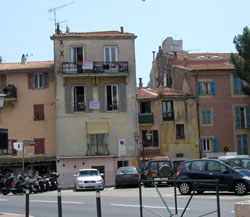 From Eze it’s a very short trip up to La Turbie, only 5K or so. We’re there in no time. La Turbie is built on a cliff that overlooks Monaco and Monte Carlo. There’s a nice little scenic spot where you can get a spectacular view. There’s also a very famous ancient ruin named “Trophee des Alpes,” a Roman monument which was built in 6BC to mark victory over the local tribes. We consider visiting it, but it’s closed for lunch. So, a quick look around the town, a stop at a small grocery store for Orangina, a stop at the town fountain to refill our water bottles and we’re headed back down to Nice. We take the back route, over the Col d’Eze, which runs through what I think is a National Forrest. It’s a beautiful ride, not much traffic at all. A very nice, fast descent down into the back side of Nice and we’re done. “Is that all we’re going to ride today?” asks Connie. We’ve only put in 25 miles or so. “Well, we can do more if you want,” I reply, “but we’ve got some big days ahead of us and I think this is a great little warm up ride.” She seems satisfied as we head back to the apartment.