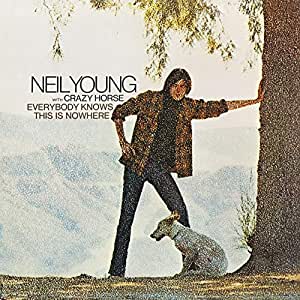 Everybody Knows This Is Nowhere

It’s hard to believe this album is nearly 40 years old. But it will be next year. Forty years. It still sounds so fresh and vibrant. A hell of a lot better than most of the stuff being released these days, that’s for sure. That opening stomp of guitars, bass and drums on “Cinnamon Girl” is just classic. This was not my first Neil Young album, nor is it my favorite (although I do love it from start to finish). I first came to know of Neil on Déjà Vu. My older sister was a few years ahead of me and I took anything she said about music to heart. She turned me on to CSN right about the time Déjà Vu was being released. I went to the record store to get my 8-Track of Crosby, Stills and Nash and the guy tried to talk me into Déjà Vu instead. No, my sister, really liked the first one, so I got that one. Later I did get Déjà Vu. But it was After The Goldrush that really brought Neil home to me. I had read a review of it in my high school newspaper and when I bought it I fell in love immediately. I’d never heard a record so fragile and yet so hard. The voice, the songs, the lyrics. Everything about it amazed me. So I immediately went back and picked up the self-titled first album and Everybody Knows This Is Nowhere.

For most people Everybody Knows This Is Nowhere means three things: “Down By The River,” “Cowgirl In The Sand” and the first album with Crazy Horse. This was the album that announced Neil Young as a real rocker. Sure he’d rocked some with Buffalo Springfield, but the self-titled album was almost a singer-songwriter/folkie effort. This was guitar rock through and through. And while those two previously mentioned songs are indeed all-time Neil Young classics, my favorites have always been “Cinnamon Girl,” “Everybody Knows This Is Nowhere” and “The Losing End (When You’re On),” a stone cold country song if there ever was one.

But, like I say, it’s not my favorite Neil Young album. My friend Bill recently took issue with my list of Top 10 All-Time Albums (“You didn’t even get one of them right!”). Everybody Knows This Is Nowhere is in his Top 10. I’ve known Bill for over thirty years. We met in Syracuse in 1976. I remember listening to this album at his house back in those days. So, that got me thinking. What are my favorite Neil Young albums? Well, here are my top ten, in order:

OK, OK, I know. They’re all from 1969 through 1979. What can I say. Neil’s made some really good albums since then (Ragged Glory, Freedom, Silver & Gold), some really, really bad ones (Landing On Water, Life) and some stuff that just leaves me flat (Are You Passionate?, Mirror Ball, Harvest Moon). And a lot of other stuff that falls somewhere in between. But nothing can touch this run from 1969 to 1979. Nothing even comes close. Sorry.

I had the good fortune to go see Neil at The Ryman Auditorium here in Nashville when Jonathan Demme filmed the shows for what would become the Heart Of Gold movie. I actually got to go both nights and had fabulous seats thanks to a couple of great friends. What a disappointment. It was fantastic to see Neil up close in such a great setting. But the songs. He played all the songs from his forthcoming album, Prairie Wind. It hadn’t been released yet, so I hadn’t heard any of the songs. I was struck at their mediocracy. God, I wanted to like them, but they just weren’t that good. Of course, I bought the album and gave it several listens, but really, these are just not great songs. A lot of people seemed to really like the album and it was once again hailed as a “return to form” (how many times is that now?). Rubbish. Put it next to any of the ten albums above and the best song on Prairie Wind can’t hold a candle to the worst song on any of them.

Neil’s been saying for over 15 years, yes 15 years, that he’s going to release a box set of “archival material.” I read the first announcement in ICE Magazine (rip) over 15 years ago. It was supposed to come out sometime that year. Of course, it never did. Since then rumors pop up every few years. Last year someone even saw a catalog number assigned to it by the record label so the announced September 2007 release date was taken as gospel. It never happened. Recently Neil announced it would be coming out this fall on Blu-Ray discs. Whatever. I don’t believe a word of it anymore. I’ll believe it when I hold it in my hands. Until then, it’s just a rumor. He leaked out the Live At The Fillmore East and Live At Massey Hall in 2006 and 2007 which are both fantastic. Let’s hope the box set lives up to the promise of these two discs. Until then there’s always the fan based release Archives Be Damned, a wonderful 5 disc collection of rarities collected and issued by the fans years ago. And one of the most beautiful bootleg box sets of all time, Rock ‘N’ Roll Cowboy, a four disc collection of live tracks from 1966 to 1994 (issued by Great Dane in 1994) with amazing packaging that puts to shame many of the officially released boxed sets.  And, finally, the fan based release, A Perfect Echo, an eight disc collection of mostly soundboard live recordings form Neil’s entire career. Make no mistake. If the artists don’t put this stuff out the fans will. And quite often they even do a better job.