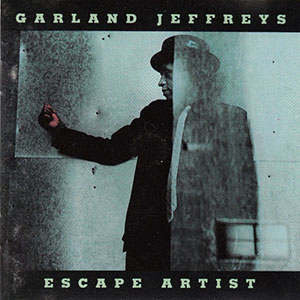 Garland Jeffreys is one of those artists who just seems to keep slipping through the cracks. He first released an album titled Garland Jeffreys And Grinder’s Switch on Vanguard in 1970. Then a jump to Atlantic for a self-titled CD in 1973 (recently reissued, thankfully, by Collectors Choice). It contained a few good songs, but was a little spotty overall. He then released a string of critically acclaimed albums on A&M in the late 1970s. Ghost Writer (1977, with the “almost” hit “Wild In The Streets”), One Eyed Jack (1978) and American Boy & Girl (1979) were all very well received by everyone, it seems, except the record buying public. American Boy & Girl was especially strong and the first time I fell in love with one of his albums. Songs like “Livin’ For Me,” “Ship Of Fools” and “Shoot Out The Moonlight” kept this LP in steady rotation on my record player. He actually had a hit, or so the story goes, in Spain with the track “Matador.” But in the US, nothing. Another jump, this time to Epic. Hey, something must have been working somewhere because he at least seemed to be able to keep getting signed to a new label. Someone must have believed in him and seen the potential.

Escape Artist was released in early 1981 and as far as I’m concerned is his masterpiece. One of my top 25 albums of all time. Brilliant from start to finish, there’s not a bad song on the entire album. Jeffreys is a songwriter at heart but he rocks out on Escape Artist in a way he hadn’t done previously, seamlessly mixing rock, reggae, punk, new wave and pop with perfect melodies, great lyrics and spot on production (Jeffreys and Bob Clearmountain). G.E. Smith (who would later play with Bob Dylan and front the Saturday Night Live band) plays guitar. Danny Federici and Roy Bittan (from Springsteen’s E Street Band) play organ, accordion and piano. Andrew Bodnar and Steve Goulding from The Rumour play bass and drums, respectively. Guests include Lou Reed, David Johansen, Nona Hendryx, Big Youth and Adrian Belew. Now, all the guest artists and stellar musicians in the world will get you nowhere unless you have the songs, the passion, the vision and the creativity to make something special happen. The credits alone betray an artist’s last gasp to finally get everything right and reach a bigger audience.  Well, they managed the first part magnificently but still fell short on the second. No one seemed to notice. And what a shame. “Modern Lovers,” “Christine,” “Ghost Of A Chance,” “R.O.C.K.” and “Mystery Kids” are terrific songs (as are all the others, those are just my favorites).

When Escape Artist was first released it came with a 7″ 33rpm 4 song “bonus disc.” Much to their credit Epic included the four songs on the CD release when it was finally issued in 1990. One of these bonus tracks is a killer alternate “slow” version of “Christine” one of the best cuts on the album. Unfortunately, the Epic CD is no longer in print, but the album is still available as a somewhat pricey import with even three more bonus tracks. I also have an excellent live bootleg CD recorded shortly after Escape Artist was released with Jeffreys being backed by most of The Rumour.

Garland continued to release records in the 80s and 90s, though at a pretty slow pace. Epic stuck with him for two more albums after Escape Artist. The live Rock ‘N’ Roll Adult and the studio album Guts For Love were all that appeared in the 11 years after Escape Artist. Don’t Call Me Buckwheat and Wildlife Dictionary came out in the 90s on RCA (still managing to get signed to major labels!). Bruce Springsteen is a fan and invited Jeffreys to appear at three of his special Asbury Park “Holiday” shows in 2003. In 2006 Jeffreys finally released another new album, I’m Alive. I was quite excited by this and when I heard about it I immediately rushed to his website to buy the CD. But you know what? I still haven’t heard this album. Why? Because it was over priced, both on his own website and at Amazon.com. Sorry, as much as I love an artist, there’s just WAY too much music out there. I’m almost certainly not going to shell our $20+ for a CD. This is just plain stupid. Short sighted. You want to reach a new audience? You want someone to hear your music, get excited about it and spread the word? Then sell it at a reasonable price. Now that CD is no longer available on Jeffreys’ own web site or at Amazon (except used).