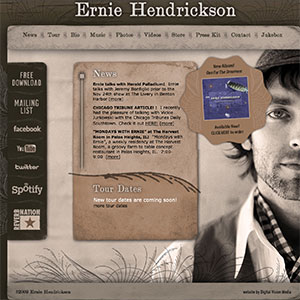 I just completed designing, building and launching a new website for a great indie musician in Chicago, Ernie Hendrickson. His new album, Walking With Angels, is due to be released on October 13th. The album was produced by Bo Ramsey and it’s a real treat. Ernie grew up listengin to artists like Willie Nelson, Bob Dylan, Neil Young, Cat Stevens and The Grateful Dead and these influences are clearly present in his own music. Yet, he manages to write, record and perform songs and music that are uniquely his own.

The website was great to work on. Ernie had some wonderful photography which I used as a cornerstone. I tried to coordinate the look of the website with the packaging of the CD (by Gina Binkley) pulling some colors and elements from the design. I placed a lot of emphasis on his social networking links (Mailing List, FaceBook, MySpace, Twitter, SonicBids and ReverbNation) making them as prominent as the main navigation (maybe even more). It all came together nicely and I think it’s one of the best sites I’ve done. Get more information at the Digital Vision Media website.