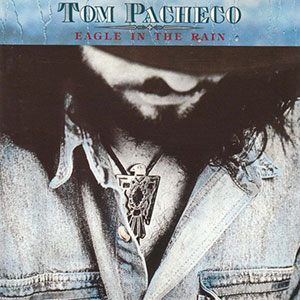 Eagle In The Rain

I first moved to Austin in 1976. I moved away for two years, but then came back in 1982. I went to a lot of concerts and shows in those days. I hardly ever go to any these days. There is a great venue in Austin, The Paramount Theatre, and it may be my favorite place in the entire world to see a concert. I saw tons of acts there in the late 70s and throughout the 80s and even into the 90s. But I also went to a lot of clubs to see smaller artists and bands. One of my all-time favorites was Emma Jo’s on North Lamar. A tiny little club, it catered mostly to singer-songwriters and acoustic artists: people like Townes Van Zandt, Lucinda Williams, Nanci Griffith, Butch Hancock, etc. But there was at least one artist who would always play with a band and just rock the joint from top to bottom: Tom Pacheco. Tom was from the New York area, he’d lived in Woodstock for a long time. I have no idea how he ended up in Austin, but he was living there for about a year or two and he would play regularly at places like Emma Jo’s and Hut’s. I tried to catch every single performance and I managed to see him quite a few times. I heard him to some fantastic songs that still don’t seem to have appeared on any of his albums since then. And his band was just stellar. Tom is a songwriter first and foremost, but with the right band he can put on one hell of a show.

I was familiar with Tom through his two RCA albums: Swallowed Up In The Great American Heartland and The Outsider, both released in 1976. He’s a very unique, distinctive songwriter. Story telling is his forte. His story songs can veer off into wild territory, UFOs and alien visitations, beer killing bacteria, energy producing crystals, the life of a tree, JFK’s assasin, etc. but he always manages to pull it off (well, most of the time).  He also has a very strong political vein and comparisons to Woody Guthrie would not be out of line. A true romantic, he’s written some beautiful love songs and has a great way of exploring relationships from all points of view. He moved to Austin in 1981 or 1982, I don’t know for sure and put together a terrific band called The Hellhounds.  I think he may have had a “deal” with a production company, Third Coast Productions, and I also think he may have recorded some tracks, but nothing from this time was ever released. He moved back to New York in 1983, then on to Nashville and Dublin. His time in Austin was well spent, and based on the songs I heard him do during that time, I think it may have been one of his most creative and prolific songwriting periods. A friend of mine recorded several of the shows at Emma Jo’s and I still have copies of those tapes. The quality is pretty good for an audience recording, but it’s certainly not “commercial” quality. Still, I treasure those tapes, not only because they contain some terrific songs and performances but also because they bring back a lot of great memories.

Eagle In The Rain, released in 1989, was Tom’s third album. There was a gap of 13 years between The Outsider and Eagle In The Rain. Tom has since made up for that gap releasing quite a few albums in the 90s and 2000’s. This may be my favorite of all his albums. Overall, I think it’s the most balanced and cohesive. Like I say, Tom is a terrific writer, but he does have a tendency to get a bit “overemotional,” even “schmaltzy” from time to time. He writes a lot of songs it seems and not all of them are really up to par with his best. He’s the kind of songwriter that could really benefit from a great editor. On this collection of 11 songs he manages to keep those issues at bay. The album opens with one of his best songs ever, “Robert And Ramona,” the story of two doomed outcast lovers. “Midnight At The Hot Club,” “Donna Marie,” “She Always Thought He’d Come Back,” “Jesus In A Leather Jacket” and “The Last Blue Whale In The Ocean” are perfect examples of his fine story telling abilities. “Made In America” picks up where “Swallowed Up In The Great American Heartland” left off 13 years earlier. “All Because Of You” and “All I Can Look At Is You” find Tom working familiar romantic territory with his heart (as always) squarely on his sleeve. “You Will Not Be Forgotten” and “Just A Little Bullet” (which closes the album) touch on his political leanings. It’s a damn fine album from beginning to end. Produced by well known Irish performer Arty McGlynn, the album was recorded in Ireland and features Irish musicians, who bring just the right sound to these songs.

Like I say, Tom’s made quite a few more albums since this one. Unfortunately, most of them are pretty hard to find. He seems to record for small, out of the way labels and a lot of the albums don’t stay in print very long. I’ve tried to keep up with them all, but most of them have only been released in Europe and when you can find them they are quite pricey. Still, I think I have the majority of them. A few recent ones have slipped by me, but hopefully I’ll be able to find those one of these days at a reasonable price. Tom Pacheco is a true songwriting treasure and I sure hope he continues to keep new songs and albums coming for us to listen to.