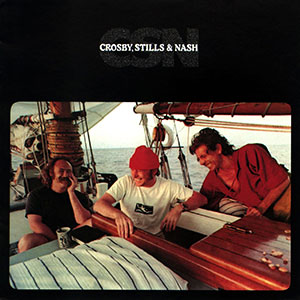 First let me say that of the four artists in CSNY Neil Young is probably my favorite. I “collect” Neil Young. I’ve got all the albums. I’ve got a ton of bootlegs. But I sincerely believe he ruined Crosby, Stills & Nash. I think it was a mistake to add him to the group after the first album. He didn’t bring anything to the group as a “band.” It was always like Crosby, Stills & Nash AND Young. The three of them with Neil Young tacked on. They would have been better off without him. I think Déja Vu is a fine album, but it’s nowhere near as good as this album or the first Crosby, Stills & Nash album. Neil’s just not a “team” player. The great thing about CSN was/is the way they blend together so seamlessly. If you stop and think about each song it’s very clear which one is a Stills song, a Nash song or a Crosby song. But, if you just put the music on and listen to it, get lost in it, it’s all just Crosby, Stills and Nash. Hard to explain really, but if you know what I mean that makes sense to you.

By 1977 these guys had splintered, soloed, grouped, regrouped and splintered again. In the 8 years since the first self-titled album had been released they had recorded quite a bit of music in various incarnations. Stills had made several solo albums, and two albums with Manassas. Nash had made a couple of solo albums and a couple of albums with Crosby. Crosby had made one solo album and the aforementioned albums with Nash. Between the three of them they had made an astounding number of fine albums, some of them all-time masterpieces. They had become huge superstars. The stories of egos, drugs, money and fame are legendary and endless. We had no right to expect this good of an album when they regrouped for a “comeback.” It had been seven years since Déja Vu. But, wow, what a great album this is. Next to the first album, this is the highlight of the group for me. Never again would they come anywhere near to making this fine of an album.

There’s not a bad cut on the entire album and a handful are just plain classics. “Shadow Captain,” “See The Changes,” “Dark Star,” “Just A Song Before I Go” and my favorite, “Cathedral.” I never get tired of listening to these songs. In fact, I may be listening to the CD now more than I ever did before. It just seems to get better and better with age. Like I say, the first album is still my favorite, but there’s a certain “dated” feeling to it. It’s full of beautiful music and songs but, for me at least, it’s rooted in 1969. CSN feels timeless. I don’t know if they feel they had something to prove at this point or if the simple, pure joy of singing together again just pushed them on. This album is like reconnecting with an old lover and remembering how great it was before, finding that magic for the second time.

Note that for some insane record label reasoning this album appears to be out of print in the US! It’s available on Amazon as an import for $30. Ridiculous. You can still buy greatly inferior CDs like Live It Up and After The Storm for $12 but not this one. Just ridiculous. No wonder the music business and the major labels are such a mess.