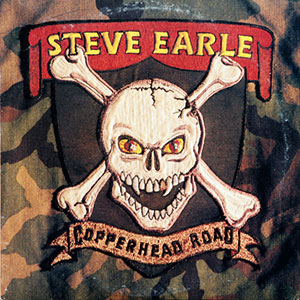 Copperhead Road was never my favorite early period Steve Earle album. With Steve, I, like many others, tend to divide his recorded output into pre-jail/post-jail. Of the five albums he released before getting clean, I’d have to go with Guitar Town and then Exit 0. The Hard Way and Shut Up And Die Like An Aviator almost never get any listens from me these days. I can understand why Universal chose Copperhead Road for the Deluxe Edition treatment, but it would not have been my choice. The songs just aren’t that strong.

With all due respect to Chris Morris (who wrote the liner notes and is a great music writer) the songs on this album are just not that strong. It may be Earle’s only platinum album but it’s far from his best. If I was putting together a Steve Earle playlist for my iPod, only two songs from this album would find their way into it: the title track and “The Devil’s Right Hand.” And maybe not even “The Devil’s Right Hand” as I might go with the version off Early Tracks. Yeah, I probably would. The rest are just not up to par with his best songwriting. A lot has been made of the production on this album, the big “Springsteen-ish” rock sound. To me it works better on paper. This album has always sounded flat and dense to me. I don’t buy the Springsteen sound comparison. I’ve never cared much for the sound of this album. Everything is buried in dark layers and seems as if it’s being filtered through a thick coat of “rock” production. “Nothing But A Child” is a much better song than it appears. There’s no intimacy, no immediateness in the production and presentation. If this song had appeared on one of Earle’s late 90’s albums it would probably stand out a lot more than it does here.

The bonus disc of 17 live cuts (11 previously unreleased) from 1987 through 1989 is the reason I bought this Deluxe Edition. And I hate to say it, but it’s a little disappointing. The 11 unreleased songs from Raleigh, North Carolina in 1987 are a nice snapshot of Earle live shortly before Copperhead Road was recorded. A decent selection of early songs is marred by the sound quality, which is muddy, undfefned and thick. Still, with so little live Steve Earle available commercially from this time period it’s a welcome addition. One welcome surprise is an previously unheard (at least to these ears) Rodney Crowell song, “Brown And Root.” I jusst find it hard to believe someone couldn’t have come up with a better recorded show from this time period. The other six tracks were all collected from various b-sides and bonus tracks released around the same time as Copperhead Road. Unfortunately, the sound quality is not a whole lot better on these tracks either. I’ve got Steve Earle bootlegs with better sound that this.