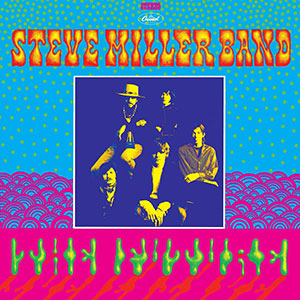 Children Of The Future

Most people generally know of Steve Miller via “Fly Like An Eagle,” “Take The Money And Run,” “Jet Airliner” and a few other massive mid-70s mainstream hits. Sure, some probably also remember “Space Cowboy,” “Gangster Of Love” and “Living In The USA” from several years earlier. In fact, 1976’s Fly Like An Eagle (his really big breakthrough) was Steve Miller’s eighth album. The Joker, released in 1973 had indeed done very well also, going platinum I think. Miller was signed to Capitol Records from the very beginning and recorded almost his entire output for them. I think only his last real album, 1993’s Wide River, was recorded for another label. A story like that would be completely unheard of today. These days you get dropped if your first album isn’t a smash. You might get the chance to make a follow up if the label really thinks there’s some potential. But three, four, five, six, seven albums before a big hit? No way in hell.

I have to admit, until recently I too was mostly just familiar with the 70s albums. Fly Like An Eagle and Book Of Dreams are classic 70s albums that I come back to often. Somewhere along the line I’d also picked up a copy of The Best Of 1968-1973 which covers the “pre” Fly Like An Eagle era (but for some odd reason doesn’t contain anything from Children Of The Future). But, in truth, I’d probably only listened to it once. I knew Miller had made a bunch of earlier albums, but never found the time or inspiration to go tracking them down.

Late last year Rhino Records issued one of their truly fabulous box set compilations, Love Is The Song We Sing, a four disc set of late 60s San Francisco rock. I’ll buy almost any box set compilation they put out (Nuggets, Nuggets II, Children Of Nuggets, Rockin’ Bones, Loud, Fast & Out Of Control, No Thanks: The 70s Punk Rebellion, One Kiss Led To Another: Girl Group Sounds, to name a few). One of the tracks that caught my attention on Love Is The Song We Sing is “Roll With It.” Wow, this sounds great. The Steve Miller Band? From 1968? Who knew? So, as often happens when I listen to these compilations I started looking through Amazon for early Steve Miller Band CDs, especially Children Of The Future (from which “Roll With It” was taken.) I found it on sale for $7.99, so I ordered it and now I’m playing it quite a bit.

The cover is a typical “spaced out” psychedelic affair, but this was, after all, San Francisco in 1968. Side one of the original LP was one long extended piece of music (again, very 1968) with each song segueing seamlessly into the next. The album opens with a loud, raucous, feedback driven short intro that dovetails into an acoustic riff with seagulls chirping in the background and soft double tracked vocals. You can almost hear the roots of the 70s Steve Miller Band sound here and then suddenly the song kicks into “Pushed Me To It” a snappy little rocker that only last 38 seconds before “You’ve Got The Power” takes over for another 53 seconds. From there we have a lengthy blues rock piece titled “In My First Mind” and then the centerpiece of side one, “The Beauty Of Time Is That It’s Snowing (Psychedelic B.B.),” which ties back into the intro (with the seagulls returning) along with lots of odd sound effects and mood setting instrumental passages. A true 60s “psychedelic” jam.

Side two consists of mostly blues-rock pieces (acoustic and electric) including two great songs written by band member Boz Scaggs, especially “Baby’s Callin’ Me Home.” Yep, that Boz Scaggs. He played in the Steve Miller Band for their first two albums, this one and Sailor, before exiting to start his solo career. There’s another good example of the way labels would support, nurture and encourage artists in the sixties and seventies. Boz made five albums before his big breakthrough (Silk Degrees) in 1976. A laid back, acoustic, harmonica and organ driven version of “Key To The Highway” rounds out the album on a great note.

It’s true that I listen to a lot of “old” music, but I listen to an awful lot of music that is “new to me.” I’m constantly going back and filling in missing catalog items, discovering new artists that I’d missed the first time around, revisiting artists and CDs that I’d never really given a chance before. There’s just way too much music out there to get to all of it. Compilations like Love Is The Song We Sing usually end up costing me far more than the initial cost of the box set. Song after song will send me researching at allmusic.com or Amazon and before I know it I’m buying album after album based on some track I really liked on the box set. Children Of The Future already has me inspired to start picking up even more early Steve Miller Band CDs.