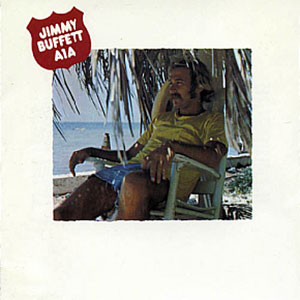 I have a friend who won’t listen to Jimmy Buffett because his ex-wife used to listen to him all the time. It’s funny how artists can impact our lives in so many ways, some quite subtle, some very direct. This is probably the only album that ever played an instrumental part in my moving to a new town. In 1975 I was living in Hawthorne, California and working for the Wherehouse record chain. I was listening to as much music as I could buy, mostly stuff like Elliott Murphy, Bruce Springsteen, The Flying Burrito Bros, Emmylou Harris, Gram Parsons, Jerry Jeff Walker, Little Feat, John Stewart and lots more. I also listened a lot of a guy on a local FM radio station (KMET), Jimmy Rabbitt. He was one of the first DJs I ever heard play country-rock and just plain country on a traditional rock oriented FM station. Some friends of mine turned me on to Jimmy Buffett’s ABC Records debut release, A White Sportscoat And A Pink Crustacean. It was actually Buffett’s third album. He’d made two albums for the small Barnaby Records label: Down To Earth (1970) and High Cumberland Jubilee (1971), both of which sank without a trace. He signed with ABC/Dunhill and in 1973 released A White Sportscoat And A Pink Crustacean. It wasn’t any more commercially successful than the first two, but it was a giant step forward for Buffett in terms of songwriting and presentation. One of Buffett’s true strengths is his ability to tell a great story. Often times they can be quite comical, but on occasion they can quite insightful and profound. This album contained a few from both camps. And it was here that his Key West, beach bum, bar hopping, good timing, Caribbean sailing personality became to really take shape on vinyl. It’s a fine, fine record with some great songs. I immediately discovered that Buffett had two more albums, both released in 1974, Living And Dying In 3/4 Time and A1A. I searched them both out. Living And Dying in 3/4 Time was another strong effort and it even contained a small hit, “Come Monday.” But it was A1A that really caught my attention.

The album kicks off with a lively version of Alex Harvey’s “Makin’ Music For Money.” I guess it’s not really for me to say, but I’ve always found it hard to take this song seriously coming from Jimmy Buffett. The man’s a marketing genius. These days he overseas a virtual empire of restaurants, minor league baseball teams, stores, casinos, books and more. It’s said he earns over $100 million per year. The guy has always been about making music for money. Hey, I don’t hold it against him. More power to him, it’s just that this song doesn’t ring true.  One of the highlights of the album is his version of John Sebastions “Stories We Could Tell,” a beautiful ode to friends and traveling. I’m pretty partial to Sebastion’s own version of this song (found on his great, criminally underrated album Tarzana Kid), but Buffett does a very credible version here. There are many fine songs to be found on this record, but the real center and soul of the album are two songs on side two: “A Pirate Looks At Forty” and “Trying To Reason With Hurricane Season.” “A Pirate Looks At Forty” is easily one of the best songs Buffett has ever written, maybe even the best. It’s also the kind of song he has not written, unfortunately, in a very long time since. A story song about an aging, directionless, aimless modern day “pirate,” it’s a minor masterpiece that perfectly captures the melancholy and borderline despair of a man completely out of step with the times in which he finds himself. “Trying To Reason With Hurricane Season” is a more personal, as Buffett takes account of his life. Other highlights include the whimsical “Nautical Wheelers,” the warm, contented “Tin Cup Chalice” and the tourist loathing “Migration.” As far as I’m concerned this was the last really great album Jimmy Buffett made. He certainly found much greater success with future albums such as Changes In Latitudes, Changes In Attitudes (with it’s big hit “Margaritaville”) but he never made another album as uniformly excellent as this from beginning to end.

All three of Buffett’s albums painted a very enticing picture of the Florida beaches and especially Key West. I’d grown up in the Southern California area, loved to swim and always wanted to live closer to the beach. Key West seemed like the place for me. I packed up a suitcase, tied a sleeping bag to it and headed across the country, hitchhiking through California, Arizona, New Mexico and Texas before heading north. It was, of course, much faster to go straight through the deep south, but this was 1975 afterall and “easy rider” stories were rampant. I decided it was well worth the extra time and miles to bypass the deep south and scoot a little further north, going through Arkansas, Tennessee and North Carolina before heading down the East Coast into Florida. Well, it almost worked. I got thrown in jail in Conway, Arkansas along with a couple and their small child who had picked me up. What for? Who the hell knows. They didn’t like the looks of us. Luckily they didn’t keep us too long, just long enough to scare the hell out of me. I eventually did make it to Key West without much more trouble. I think it took just over two weeks total for the trip. I rented a room in a boarding house called The Q Rooms for $12.50 per week. Yep, $12.50 per week. It was a tiny room. There was space for a single bed and not much more. I got a job in the one record store on the island. I tried so hard to convince myself that, as Buffett said, “I had finally found me a home.” But, it seems I still had a lot of traveling left in my blood and I only ended up staying there for about six months before I was back on the road again, this time heading for New York. Six months was a much longer period of time in those days than it is today. And believe me, Key West was a much different place in those days as well. I wasn’t really there long enough to miss it, but I still miss the idea of “finding a home” there.